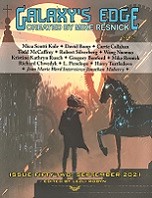 “The 43 Antarean Dynasties” by Mike Resnick (reprint, not reviewed)

“The Whisper of Winter” by Carrie Callahan

“Against the Current” by Robert Silverberg (reprint, not reviewed)

“Tracks on the Moon” by Todd McCaffrey

“Fenn and the Little Men” by Kristine Kathryn Rusch (reprint, not reviewed)

“Into a Warm Cold Night” by Wang Nuonuo

The five original works of fiction in this issue take characters into other times, other places, and other realities.

“Three, Two, One…” by Mica Scotti Kole involves a team of time travelers with erased memories sent into the past. At first, it seems that their grim duty is to kill children in order to change history. The paradoxes inherent to time travel lead to a revelation about their connection to the children.

As with many stories about time travel, the plot is twisted around itself in such a way as to make it difficult to follow. Although intriguing, the conclusion forces the reader to wonder why the time travel project exists at all.

In “Crystal Blue Perception” by David Boop, a man discovers a way to peer into a parallel reality. In his own world, his wife and unborn child were killed in a car wreck. In the other world, he died, and his wife survived to give birth to their son. After communicating with the alternate version of his wife, the man witnesses a horrible tragedy, and fights to prevent it from happening in his own world, and in other realities.

This work starts off as a gentle, melancholy love story, as the two grieving spouses perceive each other but can never be together. A major plot twist turns it into melodrama. This sudden change in tone may disconcert some readers.

The protagonist of “The Whisper of Winter” by Carrie Callahan is a man living in a remote cabin with his aging dog. When his supply of firewood mysteriously disappears, he goes into the forest to find a seemingly benign supernatural creature. His knowledge of myths and legends aids him in his struggle to escape the trap set for him.

The main character is engaging, and the author shows great skill in describing the outdoors. Once the plot changes from realism to fantasy, readers fond of fairy tales may find it overly familiar.

“Tracks on the Moon” by Todd McCaffrey is an odd story in which certain people discover a way to travel to the Moon for a very brief time by running. They cannot carry anything with them, so they arrive naked and must return to Earth immediately in order to survive. One woman gets all the way to Mars, and the story’s conclusion implies an even further destination.

The premise of this brief tale is certainly unique and interesting. There is little else to the story other than its concept, and once this is established the ending is not very surprising.

“Into a Warm Cold Night” by Wang Nuonuo, translated from Chinese by S. Qiouyi Lu, brings together four very different men seeking shelter from a dust storm in a remote desert area of China. One is a businessman, returning to his homeland after the depletion of its oil supplies have rendered a prosperous area nearly deserted. Another is a Buddhist monk from the distant past. The third is from the 1950s, searching for the oil not yet discovered in his time. The fourth claims to be from extremely far in the past, and says that human life on Earth actually came from Mars. It is his device, intended to travel instantaneously from Mars to Earth, that caused the warp in time. Each learns important lessons from the others.

Once the men arrive at the shelter they share until the storm ends, the story consists almost entirely of dialogue. The lack of conflict among the men might be seen as either a refreshing change, or as lacking drama. What the man from Mars discovers at the end is surprising, but lacks credibility.

Victoria Silverwolf would like to point out that this issue also contains short essays on their favorite books by Robert A. Heinlein by the winner and runner-up of a contest with that theme.