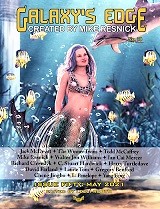 “Barnaby in Exile” by Mike Resnick (reprint, not reviewed)

“The Negotiator” by The Winner Twins

“The Mooncalfe” by David Farland (reprint, not reviewed)

“A Stripe of a Different Color” by Ian Cai Mercer

“The Snows of Maxwell Montes” by C. Stuart Hardwick

Half a dozen original works of fiction appear in this issue, including a newly translated story from the Chinese version of the magazine.

In “The Negotiator” by The Winner Twins (sisters Brittany and Brianna), the narrator is sent to parlay with her opposite number from an enemy empire. If negotiations break down, she is authorized to take desperate measures. The conversation results in both women learning about things deliberately kept hidden from them.

This brief synopsis does not reveal that the story is science fiction, containing space travel and other futuristic elements. Perhaps this is indicative of the fact that it feels more like fantasy. In any case, a key speculative element of the plot is not revealed to the reader until late in the narrative, and seems to come out of nowhere. (Without giving away too much, the fact that the authors are identical twins casts an interesting light on their choice of theme.)

“The Roast Meat Squadron” by Laurie Tom takes place in a world in which pilots in old-fashioned airplanes fight invading dragons. A brother and sister fly out of an embattled airfield to seek help, encountering the enemy along the way.

The notion of flying reptiles tangling with aircraft similar to those used in the First World War is an appealing one, and the plot creates a fair amount of suspense. Less effective is the characterization of the protagonists, who act more like adolescents than adult members of an elite military unit.

All the characters in “A Stripe of a Different Color” by Ian Cai Mercer are feline humanoids. Those who display traces of red on their black fur are considered inferior. The protagonist is secretly marked in this way, hiding the red fur with black dye. He investigates the case of a military hero accused of bearing the scarlet mark, while clandestinely working against his oppressors.

There is not much to this story other than its basic plot. The premise is interesting, but one wishes that the author had done more with it.

“The Snows of Maxwell Montes” by C. Stuart Hardwick takes place on Venus. An airship carrying two people crashes onto the deadly surface of the planet. While fighting to stay alive, the pair make a vital discovery that could change Earth’s future. This critical knowledge comes at a very high cost.

The author manages to evokes both a sense of wonder and strong emotions, combining the best aspects of hard science fiction with human drama. The climax, in particular, has a very powerful impact on the reader.

In “Timely Visitor” by Jack McDevitt, a woman from the past confronts a man of the present, enlisting his aid in telling the truth about her life. To say anything else would spoil this very simple tale of time travel. The whole is a pleasant, if minor, jeu d’esprit.

The title character in “Mr. Komatsu Hates Cats” by Cheng Jingbo (translated from Chinese by S. Qiouyi Lu) is an elderly Japanese man, living in Thailand among expatriates from many different nations. He is a reclusive figure, and rumor has it that he is responsible for the fact that none of his neighbors have pet cats. When the narrator obtains a kitten, the truth comes out about Mr. Komatsu’s regular visits to a sanitarium, and what it has to do with a mysterious cat that seems to be able to predict which patients will suffer from serious illnesses.

This is a gentle story, with a great deal of affection for its characters. Although the above synopsis may make it sound like fantasy, it is actually a work of science fiction, with a genuinely surprising explanation for its mysteries. Allusions to famous ailurophiles (including science fiction writers) serve as a bonus for readers who appreciate both felines and imaginative literature.

Victoria Silverwolf does not hate cats.