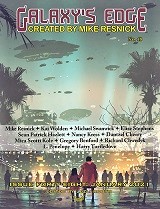 “The Homecoming” by Mike Resnick (reprint, not reviewed)

“The Broken Sky” by Kai Wolden

“Scion of the Storm” by Sean Patrick Hazlett

“Laws of Survival” by Nancy Kress (reprint, not reviewed)

“Precedent and Prejudice” by Dantzel Cherry

Five original works of fiction appear in the latest issue of the magazine founded by the late Mike Resnick.

In “The Broken Sky” by Kai Wolden, pieces of the heavens fall to the ground, causing great devastation. The main character witnesses the annihilation of his village. He is taken in by a tribe of nomads. Led by a seer, the nomads travel to the edge of the world, seeking a way to prevent universal destruction.

The premise is a fascinating one, but the narrative stops before the characters learn what lies beyond the end of the Earth. The tale also includes a gentle love story. Although this is pleasant to read, it is irrelevant to the plot.

The title of “Drowned Prison” by Elise Stephens refers to a jail through which water flows, the level of which is adjusted as a form of punishment. Among the prisoners are those with the power to imbue paintings with emotions that effect those who view them. These people were forced to use their ability to create works of art aimed at enemies during battle. They are kept locked up so their skills can be used in future wars.

A man who taught such persons arrives at the jail, hoping to free the prisoners and take them under his care. He accepts an assignment to investigate why so many of them are dying while in custody.

The fantastic content of the story is original and intriguing. Once the protagonist begins acting as a detective, however, it becomes a less interesting murder mystery. Fans of whodunits will be frustrated by the fact that the solution to the puzzle depends on aspects of this fantasy world not revealed to the reader until the main character has solved the crime.

In “Scion of the Storm” by Sean Patrick Hazlett, an unemployed financial worker accepts a peculiar job offer from a mysterious figure. In exchange for an enormous salary, he must keep a bag of coins for a year, returning it after that time. As you would expect, there turns out to be a catch.

At first, the author creates sympathy for the protagonist, who is a child of the working class trying to make a living among those of higher social status. Later in the story, he becomes selfish and greedy. Whether this is appropriate character development or inconsistency is a matter of judgment. The fantasy content of the plot comes from a wide variety of sources, from folklore to pseudoscience to the Bible. These disparate elements do not always work together well.

All the characters in “Precedent and Prejudice” by Dantzel Cherry are animals. An uneasy truce exists between carnivores and their former prey. A predator can acquire the characteristics of another animal by overcoming it and wearing it around its neck. A crisis develops when a wolf tries to make unauthorized use of a doe in this way. Both animals, as well as the wolf’s pack, disappear. It’s up to the protagonist, a bear, to find the missing animals before a mob of angry deer make war on the predators.

The story’s mood varies between serious and whimsical. The animals seem very human; the bear comes across as a hardboiled private detective. The explanation for the vanishings comes as an unexpected twist, but it requires more suspension of disbelief than some readers might be willing to supply.

“Grave 657” by Mica Scotti Kole is a brief account of a maintenance robot cleaning a cemetery. It has terse conversations with other machines, and watches people perform rituals of mourning.

The author creates a fully convincing nonhuman character without anthropomorphizing it. Although there is no real plot, the story has emotional appeal.

Victoria Silverwolf notes that this issue does not contain the usual interview.