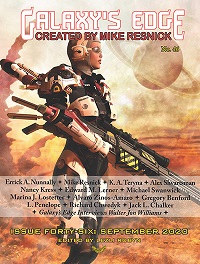 “The Bone Kite” by Errick A. Nunnally

“The Last Dog” by Mike Resnick (reprint, not reviewed)

“No One Ever Leaves Port Henri” by K. A. Teryna

“Every Hour of Light and Dark” by Nancy Kress (reprint, not reviewed)

“A Case of Identity” by Edward M. Lerner (reprint, not reviewed)

“Pleasing the Parallels” by Alvaro Zinos-Amaro

The latest issue of the magazine founded by the late Mike Resnick offers an even balance of reprints and new fiction.

In “The Bone Kite” by Errick A. Nunnally, a woman wakes up to find that her husband, next to her in bed, is alive but encased in a transparent box. This bizarre event leads to an odyssey into a surreal world drawn from the imagination of her daughter. Accompanied by the strange being described in the story’s title, she faces weird challenges as she searches for a way to bring the child back into the real world.

The author displays great imagination, creating a setting that resembles a more sinister version of Oz or Wonderland. Although much of the story successfully captures the way in which young people perceive things, other parts of it seem arbitrary, and not convincing aspects of a child’s vision.

“No One Ever Leaves Port Henri” by K. A. Teryna is translated from Russian by Alex Shvartsman. The setting is a Caribbean island, some years after the First World War. The narrator arrives on the island after escaping from a prison colony, where he was sent for a crime he observed but did not take part in. (The colony is called Hell’s Island instead of Devil’s Island, which suggests that this story is alternate history.) He marries and has a son. Years later, the king of the island selects the boy as his heir. The narrator plans a way for the child and his mother to escape, because he knows the king really wants to take over the boy’s body, condemning his soul to an eternity of anguish.

The fantasy aspects only become obvious near the end, although there are scattered hints of the supernatural throughout. Most of the story reads like historical fiction. The reader learns a great deal about the narrator’s life before he came to the island. This adds to the character’s verisimilitude, but many of his adventures, dramatic as they are, are irrelevant to the plot.

In “Things That Shouldn’t Exist” by Marina J. Lostetter, a crying face the size of a giant star appears in deep space. The narrator, dying of cancer, voyages to the face, choosing to die quickly by plunging into it rather than face a slow and painful death from the disease.

This synopsis describes the entire plot of the story. Although written in the informal, realistic style of much science fiction, it has the feeling of a mystical prose poem. The image of the face is striking, although it walks a very thin line between genuinely moving and ludicrous.

“Pleasing the Parallels” by Alvaro Zinos-Amaro features an aging woman who has false memories about her past. It turns out that she remembers alternate versions of her life. Technology allows her to transfer these memories into the mind of another person, allowing her to retain memories from her own reality. The story is narrated by the woman’s daughter, who has an encounter that reveals the full story of her mother’s alternate memories.

The basic premise is an interesting one, although the way in which it works is not always plausible. The plot wanders around quite a bit, with digressions into the narrator trying to discover the identity of the volunteer accepting her mother’s alternate memories, and the mother deciding to accelerate the process rather than delay it. These subplots are not fully resolved, because the climax of the story, something of a deus ex machina, renders them unimportant.

Victoria Silverwolf is pleased that editor Lezli Robyn appears to have triumphed in her battle with Covid-19.