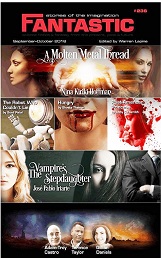 The September/October issue of Fantastic Stories of the Imagination features five stories, all of which have something to say about people changing, and perhaps losing something of themselves in the process. Three of these are reprints (and will not be reviewed here); the other two are both fantasy.

In “A Molten Metal Thread,” by Nina Kiriki Hoffman, we meet Amerit, a woman returning to her apartment after work. She notices an odd smell, one which brings back bad memories for her, and then finds her best friend in her living room. But her friend is not alone… It’s an intriguing premise, and as we learn more about Amerit and the world in which she’s living, it becomes increasingly so. There are some wonderful, yet simple, pieces of imagery here. I loved the description of the stranger’s eyes as “crystalline,” for example, and I could almost smell the patchouli at the start of the story. However, for me, it lost its momentum half way through. I found myself asking “but, why?” more than once, and the questions simply weren’t answered. There is a dream-like sequence where, even though I read it through three times, I couldn’t quite work out exactly what was happening. I was left with the impression that Amerit was essentially all-powerful, with the consequence that all sense of peril was lost. Sadly, the final ‘twist’ didn’t really have much impact, either. Such a shame because the beginning was fabulous, and I really wanted to understand the motivations of the different characters. I do hope that Hoffman writes more about this world and these people.

In “The Vampire’s Stepdaughter,” by José Pablo Iriarte, we meet a girl who has been ‘turned’ into a vampire by her stepfather. We learn that he also turned her mother, but had the restraint to wait until his stepdaughter was sixteen before doing the same to her. Now she’s trying to come to terms with being sixteen for all eternity, which is no fun for anyone. Of course, vampire stories are two-a-penny, and these are not entirely new ideas, but do give this one a chance – it’s very well done! Its eleven hundred words clip along at a brisk pace, and I found myself genuinely rooting for the protagonist. Iriarte also uses some clever bits of misdirection, so that the story appeared to be going one way, only to twist in another direction entirely. The conclusion is neat and nicely calls back to elements earlier in the tale. If you like vampires, you’ll enjoy this story. And if you don’t much like vampires, I still think you’ll enjoy this story!