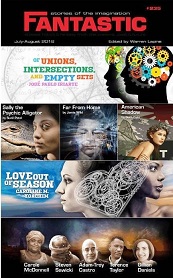 “Of Unions, Intersections, and Empty Sets” by José Pablo Iriarte

“Love Out of Season” by Caroline M. Yoachim

The July/August issue of Fantastic Stories features five stories, all of which have something to say on the nature of relationships and home. Three of these are reprints (and will not be reviewed here); the other two are both science fiction and touch on the theme of time and how it might affect our actions.

“Of Unions, Intersections, and Empty Sets” by José Pablo Iriarte is a very short piece – less than seven hundred words – told from the point of view of a female protagonist who is somewhat bitter about the fact that her partner has forgotten their anniversary. He, it seems, is completely oblivious – wrapped up in his scientific discovery that there truly is no such thing as free will. The question of whether, and how much, people are responsible for their actions hovers in the air throughout this piece. Do our past experiences shape us so much that we cannot help but behave in certain ways? It raises interesting questions, but lacks a certain something. The tale boils down to the musings of a disillusioned wife, and personally I really wanted the science fiction elements to come to the fore. The ending was also rather flat – surely there was scope here for more of a twist? In summary, although it was thought-provoking, I couldn’t help feeling some opportunities had been missed in this piece.

“Love out of Season” by Caroline M. Yoachim is a story that puts time-travel front and center. Our unnamed protagonist has lost his (or possibly her) partner in an accident with a time-machine, and she is now living three months in his past. The complications of this situation are cleverly-explored, and a story that might be horribly confusing instead flows smoothly (although, as with most time-travel tales, it’s best not to pull too hard on the threads). Of course, characters separated by time is not a new concept, but the fresh aspect here is that the time period in question is short enough that they can’t help but interfere with each other. The musing over the question of whether rifts, in both relationships and time, can ever be closed adds a poignant air. All in all, a satisfying take on an old idea.