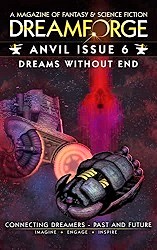 “One Small Step” by Henry Gasko

In addition to five new works of short fiction, this issue offers articles and the conclusion of a serialized novel.

In “Don’t Look Back” by John Jos. Miller, the great baseball player Satchel Paige, while still a boy, encounters a servant of Satan. He signs a contract trading his soul for success in the game whenever he needs it. Years later, as Paige faces death, he learns the truth about the bargain from an unexpected source.

An author’s note makes it clear that the story, aside from its fantasy content, is as historically accurate as possible. For that reason, it is likely to appeal to baseball fans more than other readers. Those not familiar with the history of the game may need to do some research to fully appreciate it. Aside from that aspect, this is a typical variation on the old theme of a deal with the devil.

“Dandelion Brew” by Ana Sun takes place at a future time when London is inundated with flood waters. The protagonist serves the homemade beverage named in the title from a canal boat. A high-tech vessel arrives with drones that study the environment. These machines interfere with the woman’s harvesting of dandelions, leading to conflict with the man in charge of them. An emergency brings the two together.

The setting is richly imagined and evocatively described. The futuristic technology is plausible, and makes for an interesting contrast with the low-tech operations of the protagonist. The fact that the antagonist is not evil, and is able to come to an agreement with his opponent, makes for a refreshing change.

“One Small Step” by Henry Gasko is a brief tale that offers a variation on the Apollo Project. In a fantasy version of ancient Rome, a man leaps from the top of a huge pyramid located at the peak of a tall mountain to the Moon.

In essence, this is an extended joke, the punchline of which is a twist on Neal Armstrong’s famous first words on the Moon. It is likely to provoke a smile from most readers.

In “Dark Matter Myopia” by Terry Madden, researchers attempt to detect a particular kind of dark matter deep inside an abandoned mine. A clue to the nature of this strange stuff comes from the unlikely combination of a plate of brownies, flies, and a woman’s poor eyesight.

As this brief synopsis may suggest, this isn’t the most serious story in the world, nor is the speculative content particularly plausible. Much of the plot deals with the nearsighted woman’s affection for a male colleague, and his failure to recognize her interest. Those who prefer romantic comedy to hard science fiction will best appreciate this light confection.

In “Sidha” by Bruce McAllister, an ancient starship arrives at a space station. The very old, cybernetically enhanced pilot of the vessel seeks the woman named in the title. A descendant of the long-dead woman he loved, who shares her genetic information, is sent to meet with him. Living in a society which has abandoned romantic love, she learns something of its nature from the man.

Although one may be able to predict the outcome of the encounter, it serves as an appropriate and satisfying conclusion. This is an emotional story, but it is also a believable portrait of the far future, portrayed in convincing detail.

Victoria Silverwolf has to work two extra hours this weekend.