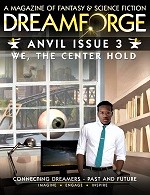 “The Clockwork Heart” by Kat Heckenbach

“The Teeny-Tiny Scotsman Who Lives on My Dresser” by W.T. Paterson

In addition to five new works of fiction, this issue contains a short poem by acclaimed author Bruce McAllister.

The narrator of “The Clockwork Heart” by Kat Heckenbach disassembles an automaton, including the realistic mechanical heart inside its chest. The heart continues to beat after it is removed from the machine’s body, haunting the narrator.

From this brief synopsis, it is obvious that the story is a variation on Edgar Allan Poe’s famous work “The Tell-Tale Heart.” There are other aspects of the plot that are similar to this classic tale as well. The story’s conclusion is different enough from Poe’s to add some originality, but is anticlimactic.

The title of “The Pluripossible Box” by Peter S. Drang refers to an alien object purchased as a curio by the main character. Neither she nor the seller know exactly what it is. The thing turns out to be a device that can create any object that can fit inside the box, but which can only be used once. After being pursued by forces after the priceless item, she uses it for a very personal reason.

Although written as science fiction, the premise is closer to pure fantasy. The box, which works just by thinking about what one wants, is essentially magical. Even if one accepts that such a device could exist, it is hard to believe that the shopkeeper has no idea how powerful it is, but the police and government do.

“Skin Deep” by P.S.C. Willis alternates sections of narrative told from the point of view of the wicked queen from “Snow White” and one of the ugly stepsisters from “Cinderella.” Both characters have been exiled after the events in the familiar stories. The stepsister arrives in the new realm of the queen, only inhabited by swamp creatures. The queen tricks her into participating in a beauty contest, to be judged by the creatures, leading to an unexpected result.

The author makes use of the old fairy tales to point out that character is more important than physical beauty, and that bad people can become good. These are worthy messages, but hardly new to most readers.

The fantasy content of “The Teeny-Tiny Scotsman Who Lives on My Dresser” by W.T. Paterson is announced in the title. A man whose wife has recently died discusses life and philosophy with the little man. He finds love with a woman who had a similar companion after the death of her husband.

The presence of the miniscule Scot adds little to an otherwise realistic story of loss, mourning, and healing. The whimsical nature of the fantastic premise clashes badly with the tale’s somber mood.

In “Mr. Gibson Goes to Work” by Timon Esaias, a large number of incredible things happen to the title character during a typical day. An alpaca drives a bus, dinosaurs and dragons appear on the street, and a gigantic floating eyeball appears outside his office window, to name just a few. During all this chaos, Mr. Gibson continues to worry about working hard enough to repay the people who helped him escape an unhappy childhood.

I am not at all sure what the author is trying to say. The ending seems to suggest that one should not always be struggling, but should take time to relax and enjoy life. The countless extraordinary events in the story eventually become overwhelming, lessening their effect.

Victoria Silverwolf had free donuts delivered to her workplace tonight.