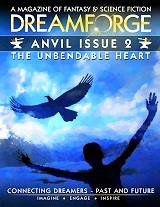 “Shaken, Not Stirred” by Wulf Moon

“I Will Never Fly Again” by Jonathon Mast

“Ava Paints the Horses” by Ville Meriläinen (reprint, not reviewed)

“Shape the Future with a Sharpie” by Bo Balder

In addition to fiction, the second issue of the revamped version of DreamForge offers poetry and essays.

The main character in “Shaken, Not Stirred” by Wulf Moon used to be a human being, but has somehow ascended into a higher form. With beings from other worlds who have evolved in similar fashion, she serves on a board that makes decisions about the way in which the mass of the universe is allocated. In order to protect the future of humanity, she must make use of office politics.

If this synopsis sounds vague, that may be because the story’s premise is difficult to understand. Astronautical terms are used in confusing ways. (The characters are sometimes called constellations, and sometimes galaxies, for example.) The frequent use of allusions to modern pop culture, from H. P. Lovecraft to Star Wars, is jarring in a setting of cosmic proportions. Some readers may appreciate the author’s satire of bureaucracy, while others may find the god-like characters who act like squabbling co-workers too whimsical.

The narrator of “Tjikko” by Edward Ahern purchases land in Newfoundland to be used as a fishing retreat. The previous owner warns him about the ancient tree on the property, which must never be cut down. Intending to destroy it when the old owner dies, in order to improve the view, the narrator discovers that the tree has ways of dealing with its enemies.

The author vividly portrays the Canadian wilderness; readers who enjoy fishing will particularly appreciate the convincing details of the sport. The warning the old owner gives to the narrator reveals too much about the tree, lessening the impact of following events.

“I Will Never Fly Again” by Jonathon Mast takes place in a world where all people have functional wings. The narrator suffers an accident and loses the power of flight. Depressed to the point of considering suicide, the narrator shares grief with a woman who faces her own form of emotional pain.

The author powerfully conveys the sense of despair that comes with devastating loss. The ending offers a touch of hope, without ignoring the fact that some psychological wounds will never fully heal. Although the plot is simple, the story is an effective fable about the inevitability of suffering.

In “Shape the Future with a Sharpie” by Bo Balder, a spaceship crashes into the vegetable garden of two young siblings. The sister has the ability to alter reality by writing about it, as long as it is something she understands. As she uses this power to help the stranded astronaut, she discovers the reason such an extraordinary event took place.

The explanation for the crash landing is a logical one, given the story’s fantasy premise, but is predictable. The overall mood of the story is very light, almost as if it were written for young readers. It comes as something of a shock when elements like the alcoholism of the siblings’ father, and a touch of sexual awakening in the sister, add a much more adult tone.