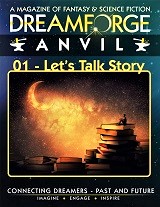 “Break Through” by Jamie D. Munro

The publication formerly known simply as DreamForge returns with a new name and a new format. Previously available in both print and digital versions, it now exists online only, although print editions are planned for the future. In addition to providing fiction, the magazine offers behind-the-scenes looks at how the editor discussed the works with their authors. Subscribers receive the bonus of being able to read full line-by-line comparisons of original manuscripts and final published stories.

In “Two Brothers, One Stone” by Anna Madden, a pair of dwarves delve deep into a gigantic hollow tree, in search of a valuable metal comet that fell into it. The object from space takes the form of a woman. The unlikely trio make their way out of the tree, teaching each other about the nature of freedom and homesickness along the way.

Although the fantasy setting is familiar in some ways, the author adds unique touches. As befits a magazine that emphasizes hope and optimism, all three characters are likable, even when they fall into conflict. Although the story is as far from hard science fiction as possible, the so-called comet does not resemble one in any way, and might have been better described as a meteorite.

“Break Through” by Jamie D. Munro takes place in a future Australia ravaged by drought and rising sea levels. A farmer and his daughter fight to save what little remains of their ancestral land as a seawall breaks, flooding their crops. The two endure a serious loss, but grow closer and plan for the future.

The story provides intriguing glimpses of plausible future technology. At first, the farther is cold and distant to the daughter, constantly comparing her unfavorably with his dead son. After the disaster, he is much more sympathetic, accepting her radical ideas for a new way of farming. Although this change is satisfying, some readers may find it too sudden to be fully believable.

Like the previous work, “Invasive Species” by Angelique Fawns features a farmer and his daughter facing devastating climate change. In this case, however, the setting is Canada, the crop is marijuana, and the challenge is excessive rain rather than drought. Early in the story, the father is murdered. One year later, the daughter learns the identity of his killer, courtesy of an invasive species of telepathic bug. The insects offer their own threat to Earth, but the woman learns to work with them.

As this synopsis may suggest, the story begins in realistic fashion, but soon becomes highly speculative once the bugs arrive. The telepathic nature of the insects strains credibility. The narrative is divided into sections labeled “A Year Ago,” “Present Day,” and “6 Months Later.” This structure adds little or nothing to the plot, and makes for slightly awkward reading.

All of the characters in “Toward Light” by R. E. Rule are alien beings who subsist on sunlight. They face a crisis when day fails to break. There is no need for a fuller synopsis, because this work is almost all worldbuilding, with a minimal plot. The author displays great imagination, and many of the details of this extraterrestrial world are fascinating, but one might wish for more of a fully developed story.

Victoria Silverwolf came home to find part of the house burnt, but nobody was hurt and the damage was minimal.