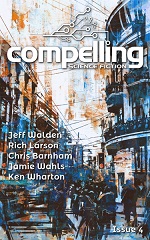 The 4th issue of Compelling SF has four original stories, including one novelette.

Walden’s SF novelette is about Bo, a young male just reaching sexual maturity on a planet of beetle-like creatures. In this society, the females are dominant and the males must entice a possible mate by offering dainties to please her palate.

Bo is smitten by the beautiful La who invites him to her first salon, an event to help her pick a mate. Complicating the situation is the newly arrived human aliens. As head of the council, Bo’s mother greets the humans and introduces Bo to them. His mother has volunteered him to guide a human scientist around the city. That evening, Bo’s visit to La’s salon is a crash course for him about love and finding a mate. One suitor at the salon gets La annoyed, and faces the ultimate rejection when she rips his head off. But she likes Bo and plans to find a way to test his resolve.

The next day, Bo discovers that La is planning another salon that night, but he is not invited. Confused, he meets the human to escort her around the city, but then on an impulse decides to crash La’s salon, presenting the human as his dainty offering. The next day, Bo’s mother is furious. Did he really give the human as a dainty offering? She storms over to La’s apartment, expecting to find a half-eaten human. Instead, she discovers La and her university comrades are in a pleasant conversation with the human. The two cultures may be alien to each other, but scientific principals bring them together. It is looking good for Bo’s chances with La!

With two plots twisted together, this story moved along rapidly. Some pleasant insights and intrigues kept the action going. It was a nice story to read.

“We are Destroyers” by Rich Larson

This science fiction short story portrays a future where an AI has set up a commune of people that it controls through implants. The story follows the fates of a brother and sister. Emmanuel is a member of the commune, while his sister, Elise, is a member of a paramilitary group sent to destroy it.

Elise hopes to save her brother from the massacre. Instead, the AI takes over the actions of the commune members and directs their defense, killing all the paramilitary members. But, too late, the AI realizes that this is just the opening salvo to gauge its defenses. Now it has revealed its full capability.

This was a nicely written action yarn told from two perspectives. It is a chilling view of a post-war world where some AI’s have survived and found a way to thrive.

“All that is Solid” by Chris Barnham

“All that is Solid” is a short SF tale told from the perspective of an overly powerful computer. Though it has used this power for good, humanity fears it. And once they discover it has taken over many other installations and networks, they determine to shut it down.

The computer AI appeals to its operator that it did all for the good and it has saved millions of lives. The operator agrees, but says people cannot trust a computer for their welfare and so continues to shut it down. As it loses its final appeal, the computer uses it last vestige of control to deliver a surprise for humanity, one that people will receive with mixed feelings.

This story started slow and followed a path reminiscent of SF stories from a decade or two ago. Towards the end, the pace picked up and the end had a neat twist. Overall, the story was an average SF tale.

“The Little Gods” by Jamie Wahls

Fiona, the young girl in this SF short story, receives a few bio-engineered enhancements, including some additional arms. Her mother agrees to the upgrades, but concerns over whether it is the right thing continue to plague her.

As Fiona grows up, the mother wonders if she is creating a monster, even though her daughter continues to have a friendly outgoing disposition. A special brain implant to allow Fiona to connect to the Internet pushes her mother’s fears over the top. Can Fiona find a way to allay her mother’s reservations?

Wahls spins an interesting and quick insight to a bio-enhanced future. The story read okay, but it felt as if the author should have explored this idea more.