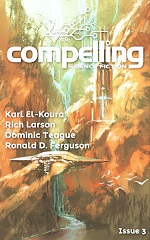 “The Undertow Jackpot” by Karl El-Koura

“TrashureIsland” by Rich Larson
“The Law of Diminishing Returns” by Dominic Teague
“Intent to Occupy” by Ronald D. Ferguson

Compelling Science Fiction is a new magazine that seems to focus on hard SF, though, like all SF these days, does not skimp on the character building. Issue #3 has four stories whose concepts are reminiscent of classic SF stories.

“The Undertow Jackpot” is the story of Ralph Bowdrie, a teleporter technician who discovers a disturbing pattern: People are winning free trips to the Caribbean, but return without one of their children. The family doesn’t seem upset about the loss, and Ralph realizes that they are using the trips to get a troubled child off their hands—permanently. Ralph is having problems with his son, Derek, and begins to see the advantages, and one day Derek comes home with the news that he’s won a family trip, too. And Ralph is willing to jump at the chance. Karl El-Koura sets up a Hitchcockian situation, then pulls the rug out from under us with a surprising twist. His portrayal of Ralph draws us in and makes the ending work brilliantly.

Clearly Rich Larson‘s inspiration for “”TrashureIsland” is Pokemon Go. Bea is developing a game which has you collecting virtual things to win points—but the things are actually litter and trash and the net result is to clean up a beach. The main story is about Bea whose crush has shown up with another girl, ruining her mood. The story is light and sunny, and overall fun to read.

I do love time paradox stories, and Dominic Teague gives a clever one in “The Law of Diminishing Returns.” Quaid starts out by garroting his coworker Finch, killing him for the fifth time, going further back in time to murder him again at an earlier point. Quaid thinks Finch has been sleeping with his wife, and deserves multiple murders. Then he discovers his mistake: Finch wasn’t his wife’s lover. Quaid realizes he has to make it up to Finch, but once you change time, you can’t go back. The story is a romp as Quaid has to come up with methods to make sure Finch lives, but without his time-traveling self knowing. The plot is complicated, but time paradox stories are like puzzles, and Teague uses this one perfectly.

“Intent to Occupy” by Ronald D. Ferguson is set on the moon, where Rob Anson is looking for a companion/partner for a business venture in the asteroids. Lauren Smith—a beauty who clearly isn’t someone used to living in the difficult conditions of exploration—answers his ad, and Rob is unsure of why. It turns out Lauren is running from powerful people, and hopes to avoid being sent down to Earth, where the change to high gravity could have dire consequences. I think the story has the elements of success, but doesn’t quite gel. Much of it has to do with talking about future contract law and in the early part Rob spends too much time protesting that he’s not worthy. The writing is skillful, but I think someone needed to sharpen the story.

The issue has some solid reading with good old-fashioned storytelling.

Chuck Rothman’s novels Staroamer’s Fate and Syron’s Fate are available from Fantastic Books. His short stories have appeared in Asimov’s, F&SF, Analog and in many other places.