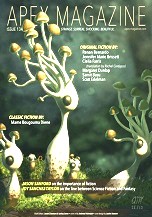 “The Walking Mirror of the Soul” by Renan Bernardo

“The Healer” by Jennifer Marie Brissett

“The Words” by Clelia Farris

“Observations of a Small Object in Decaying Orbit” by Margaret Dunlap

“Learning to Accept What’s to Come” by Scott Edelman

“The Satellite Charmer” by Mame Bougouma Diene (reprint, not reviewed)

In addition to six new short stories and a reprinted novelette, this issue offers articles, interviews, and reviews. The magazine has a strong international flavor, with authors from around the world filling its pages.

The narrator of “The Walking Mirror of the Soul” by Brazilian writer Renan Bernardo is a detective working on a space station inhabited by both humans and aliens. The extraordinary thing about the aliens is that the thoughts of those they are with appear as words on their bodies. The narrator works with an alien who witnessed a murder, while worrying about the possibility that her fiancée will leave for a better job at a distant station, ending their engagement.

Although this synopsis makes the work sound like a mystery, the investigation is actually a very minor part of the plot. The narrator’s relationship with her intended, complicated by the way her thoughts appear on the alien’s body, is the heart of the story. The author uses a unique science fiction premise to explore the nature of communication in a thoughtful and sensitive way.

In “The Healer” by Jennifer Marie Brissett, a man has cared for his sister ever since their parents died. After she is sexually assaulted in college, she comes home in an emotionally devastated state. Desperate to help her, he contacts a mysterious agency, leading to a series of strange changes in reality.

Although the story begins in a realistic fashion, it soon becomes surrealistic, with events that are difficult to fully understand. The author appears to have much more in mind than just a tale of magical retribution. If nothing else, the text conveys the frightening otherness of the supernatural. None of the characters have names, which tends to weaken the work’s emotional power.

It is difficult to discuss the plot of “The Words” by Clelia Farris, translated from Italian by Rachel Cordasco, without giving too much away. Suffice to say that it involves a pair of twin sisters, time travel, and an attempt to change an infamous event in history, with tragic consequences.

The story is written in what one might call a literary style, which makes it a little difficult to get into. Readers willing to make the effort to penetrate the work’s opaque opening sequences will be rewarded with a gripping tale of sacrifice, even if the ending is as unclear as the beginning. The text also deals with literature itself. This aspect of the narrative may or may not appeal to readers, based on their feelings about postmodern fiction.
In “Observations of a Small Object in Decaying Orbit” by
Margaret Dunlap, a young boy living aboard a generation starship loses his parents when revolutionaries take over the vessel. He grows up obedient to the new rulers, but treated as a second-class citizen because of his background. As a teenager, he returns to the place of his most powerful memory, to complete a gesture made by his father years ago.

This brief work is more of a character study than a fully developed story. The boy’s actions at the climax, although greatly meaningful in his own mind, have no real effect on his inevitable fate. Readers looking for insight into the tragic life of a young man living under a dictatorial regime will better appreciate this sad little tale more than those expecting an intricate plot.

The narrator of “Butirub” by Indian author Samit Basu works as a writer of screenplays. His loose connection to a Nineteenth Century scientist who invented an unusual ointment leads him to an encounter with a powerful figure in the film industry who is much more than he seems to be.

This tongue-in-cheek variation on a very familiar fantasy trope offers a wry look at the Indian movie business, often known as Bollywood. An absurd movie to which the narrator is asked to contribute foreshadows the story’s later supernatural content, lessening the suspense. This may not be much of a problem in a lighthearted tale. This comic piece is the longest new story in the issue, and it may go on too long for such a featherweight work.

“Learning to Accept What’s to Come” by Scott Edelman takes place after an apocalyptic war between humans and robots. What may be the last two robots left on the planet wander through a ruined world. One of them is about to cease functioning. The other, desperate to keep its only companion working, searches through the rubble and makes an extraordinary discovery, leading to a darkly ironic transformation.

Despite its melodramatic aspects, this story is really about one robot’s affection for another. The author manages to make the machines into characters with whom one can empathize. What happens after they make the discovery mentioned above may strike some readers as grotesque.

Victoria Silverwolf reviewed and recommended the reprinted story when it was first published.