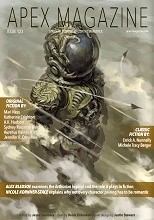 “The Life & Death of Mia Fremont: An Interview with a Killer” by A.K. Hudson

“This Is the Moment, Or One of Them” by Mari Ness

“Mishpokhe and Ash” by Sydney Rossman-Reich

“All This Darkness” by Jennifer R. Donahue

“Uniform” by Errick A. Nunnally (reprint, not reviewed)

The latest issue of this newly resurrected publication offers half a dozen new short stories, as well as reprints and nonfiction articles.

“The Life & Death of Mia Fremont: An Interview with a Killer” by A.K. Hudson takes the form of a recorded statement from a confessed murderer. It soon becomes clear that the victim and the killer are the same person, who had to destroy her old self to become someone new.

The documentary-style narration of this brief tale makes its subtle fantasy content seem very real. The story’s theme, that struggling to be perfect in the eyes of others forces one to be untrue to one’s self, comes across clearly.

In “This Is the Moment, Or One of Them” by Mari Ness, the narrator operates a computer screen that allows one to reshape both past events and memories of them. Obsessively revisiting a love affair that ended sadly, the narrator struggles to make things right.

The notion of changing the past to improve one’s life is a common one in science fiction and fantasy. Although the author powerfully conveys the narrator’s emotional turmoil, some may find the basic idea overly familiar. The story contains multiple references to the current pandemic, or one very much like it. This intrusion of the all-too-real world into a tale with a highly speculative premise seems out of place.

“Throw Rug” by Aurelius Raines II features a weak, skinny boy who joins the high school wrestling team, although he is certain to be always defeated. Amazingly, after losing many bouts, he becomes much bigger and stronger, winning every match. When he is a college student, a rival team tries to undo the magical source of his power, but fails to fully understand it.

The story is told in a series of first-person narratives, describing events from the point of view of the protagonist, his parents, his girlfriend, and so on. These multiple accounts add a sense of reality to the tale’s supernatural content. The main character’s triumph over adversity is inspiring, but the author possibly takes more time than is needed to relate a fairly simple plot.

“Mishpokhe and Ash” by Sydney Rossman-Reich takes place in Hungary during the Second World War. A young Jewish woman creates a robot from spare parts. She teaches it to never lie, steal, or harm people. As an increasing level of antisemitism threatens the lives of the woman and her family, the robot faces the dilemma of obeying its directives while trying to protect its creator.

The author creates a compelling portrait of the place and time, obviously based on a great deal of research. The theme of whether one should abandon moral principles at times of desperation is an important one. The existence of the robot, more of a fantasy steampunk device than a believable science fiction machine, clashes with the extreme realism of the rest of the story. Some readers may even find it inappropriately whimsical in such a tragic tale.

“All This Darkness” by Jennifer R. Donahue is a very short story in which the descendants of coalminers go deep down into the mines after they have been abandoned. Once they leave the outside world forever, an extraordinary event happens to the ravaged mountain wherein they now dwell. Best appreciated as a prose poem rather than as fully developed fiction, this work effectively conveys the bleakness of economically depressed areas that formerly depended on coalmining for survival.

The protagonist of “DEMON FIGHTER SUCKS” by Katherine Crighton is a teenage girl performing a magical ritual over the Internet. She addresses her audience in an insulting, cynical way, not even believing in the reality of the spell she is casting. Eventually, the reader learns of the tragedy in her life, and how the spell relates to it. Despite strong emotional appeal at the heart of the story, some readers may find the smart aleck narrative style off-putting.

Victoria Silverwolf enjoyed some popcorn while writing this review.