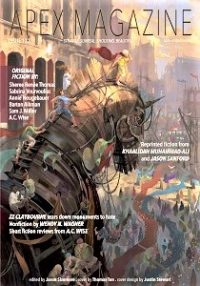 “The Amazing Exploding Women of the Early Twentieth Century” by A.C. Wise

“Black Box of the Terraworms” by Barton Aikman

“If Those Ragged Feet Won’t Run” by Annie Neugebauer

“A Love That Burns Hot Enough to Last: Deleted Scenes from a Documentary” by Sam J. Miller

“She Searches for God in the Storm Within” by Khaalidah Muhammad-Ali (reprint, not reviewed)

“The Eight-Thousanders” by Jason Sanford (reprint, not reviewed)

In addition to new and reprinted fiction, the first full-sized issue of the magazine in almost two years offers interviews, essays, and reviews.

“Barefoot and Midnight” by Sheree Renée Thomas is a brief but intense tale set in Memphis not long after the end of slavery. Racists set fire to a home for African-American orphans, killing all the children who live there. The protagonist makes use of ancient magic to exact retribution.

What is most notable about this vivid horror story is the fact that vengeance comes with a terrible price. Although almost everyone would agree that such a vicious crime deserves heavy punishment, what happens to the main character forces the reader to reconsider the consequences of seeking revenge.

Except for short sections at the beginning and end, the bulk of “The Amazing Exploding Women of the Early Twentieth Century” by A.C. Wise takes place in 1906. Two women work as actresses in the very early days of the movie industry. They appear as victims of supposedly comic mishaps in short films making use of primitive special effects, often depicting them bursting into flame. Ironically, they both possess the ability to produce fire on their bodies without harming themselves, although one is not aware of this until the other demonstrates. The more experienced of the two is cast as Joan of Arc in a feature film, making use of the opportunity to punish the abusive filmmaker for the great wrong he did to a close friend.

The author convincingly portrays Coney Island in the years prior to the First World War. The prologue and epilogue, set in 2015, are less effective. The ending suggests that there are several other people with various superpowers, lessening the wonder produced by the main part of the story.

The narrators of “Black Box of the Terraworms” by Barton Aikman are sentient machines sent to an alien world in order to prepare it for human colonization. During this process, they devour the bodies of three gigantic god-like organisms, gaining their memories as they consume them. Most of the story deals with the past interactions among the three entities – one spider-like, one a sea creature, one winged – and the ancient, vanished inhabitants of the planet, who feared and worshipped them.

This is an unusual combination of technological science fiction and mythic fantasy. The author depicts the trio of seeming deities with great imagination. The reader is likely to be intrigued by such creative worldbuilding, but may be disappointed by a rather anticlimactic conclusion.

In “If Those Ragged Feet Won’t Run” by Annie Neugebauer, a woman struggles to escape from enormous birds that kill anyone away from the safety of a village at night. Delayed in returning home by an accident that renders her ox cart useless, she must evade the monsters, while caring for her infant.

The author creates a great deal of suspense as the birds pursue their seemingly helpless prey. Any questions readers may have, such as why the woman left the security of the village in the first place, are answered in reasonable ways. The story can be read as an allegory for the power of a mother’s love, particularly when it is discovered that the birds are an adult female and her offspring. The analogy between two mothers protecting their young may seem a little too artificial in an otherwise realistic tale of dark fantasy.

“A Love That Burns Hot Enough to Last: Deleted Scenes from a Documentary” by Sam J. Miller takes the form of interviews about a deceased popular singer. The reader hears from a fellow musician, an employee of the singer, a fan whose life was changed by her music, and a Christian activist who believes the singer was a witch. The latter’s concern is justified, from her point of view, because the interviews slowly reveal that the singer’s voice did indeed possess a subtle supernatural power over listeners.

The story’s structure adds greatly to its believability. The fantasy element, although definitely present, is far in the background, making it seem very real. The characters are three-dimensional. Even the Christian activist, who threatens to become something of a stereotype, proves to have a strong motivation for her opposition to the singer.

“Las Girlfriends Guide to Subversive Eating” by Sabrina Vourvoulias is a work of interactive fiction. It consists of on-line text with multiple links to images, websites, videos, musical performances, and so forth. By definition, there is not really a linear plot. The reader is free to explore it in multiple ways.

The main characters are people of various ethnicities living in Philadelphia. Some are American citizens, some are immigrants, some are refugees, some are undocumented aliens. In particular, the so-called Las Girlfriends are three Latinas who operate a food truck. Their concoctions are not only delicious, but can provide magic, particularly for those dealing with issues of immigration.

Although full of warmth, humor, and mouth-watering descriptions of food, this is really a cry of protest against many forms of injustice. Whether or not one agrees with the author’s point of view is certain to influence one’s reaction to it. (A certain very controversial politician is mentioned more than once, in a way that is sure to provoke a strong reaction from the reader, positive or negative.) One cannot doubt the author’s passion for activism. As a whole, the work is more interesting as a political manifesto than as fully developed fiction.