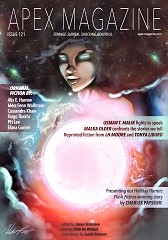 “Your Own Undoing” by P H Lee

“The Niddah” by Elana Gomel

“All I Want For Christmas” by Charles Payseur

“The Ace of Knives” by Tonya Liburd (reprint, not reviewed)

“Roots on Ya” by LH Moore (reprint, not reviewed)

The first full-sized issue of the magazine in more than a year offers half a dozen original works of fiction, the winner of a flash fiction contest, a pair of reprinted stories, articles, reviews, and interviews.

“Root Rot” by Fargo Tbakhi takes place on Mars, where a Palestinian settlement is divided by an Israeli one. The narrator is an alcoholic Palestinian. His brother arrives from Earth, where Palestine is now a united, independent nation. Offered the chance to return to his native land by selling his most precious possession, the narrator instead uses the money to support his addiction.

This dystopian vision of oppressed Palestinians on Mars is clearly intended as an allegory for the current situation in the Middle East. Certain futuristic details, such as the technology used to make the narrator forget how to speak Arabic, strengthen the impact of the analogy. The brother’s presence offers a brighter vision of a possible future for Palestinians. However, it seems implausible that the settlements on Mars came to resemble the ones on Earth so closely.

In addition to its political theme, this is a powerful portrait of an individual who rejects his last hope for happiness. The author depicts the destructive power of alcohol dependence in a visceral manner. This does not make for comfortable reading, and some may find the narrator’s endless suffering unbearable.

“Your Own Undoing” by P H Lee is narrated by a magician’s familiar, who takes on the forms of various animals. One of the magician’s students learned how to control minds, and used this power to enslave, torture, and attempt to kill his former teacher. The familiar reveals the secret behind this ability, allowing the magician to escape from the enchantment.

The author brings new life to a seemingly familiar fantasy tale through the clever use of second person narration. This technique, often used in an attempt to make a story seem more literary, serves an important purpose here. The key to the plot involves storytelling itself. By directly addressing the reader, this aspect of the story elevates the work above others of its kind.

“Love, That Hungry Thing” by Cassandra Khaw combines science fiction and fantasy in a tale set aboard a starship fleeing a dying Earth at a time when gods reappear. The narrator strikes a bargain with a deity in return for the guaranteed safety of a loved one.

This basic storyline is difficult to follow, given the narrator’s vagueness about the strange world in which it takes place. Brief reference is made to an external threat to the space travelers, but it is unclear. The futuristic and fantastic aspects of the story show imagination, but do not always work smoothly together.

As the title implies, “Mr. Death” by Alix E. Harrow involves an incarnation of mortality. In this imagined afterlife, many Grim Reapers work for a bureaucratic organization. Those selected for these positions are the recently deceased who have experienced great suffering and retain compassion. The narrator is one such spirit, who faces a crisis of conscience when he receives an assignment to take the soul of a toddler.

Although the concept is not completely original, the narrator’s situation has strong emotional appeal. The story’s ending, although inspiring, may seem overly sentimental, and appears to violate the rules of the premise.

Suggestive of the current pandemic, “The Niddah” by Elana Gomel involves a deadly disease that is spread by contact with even the tiniest amount of blood. This results in a society where women are kept in confinement during menstruation, and are oppressed in other ways. Some women infected with the disease change into strange, insect-like creatures. The narrator discovers her mother, transformed in this way, living with others of her kind. Their encounter leads to a revelation about the nature of the metamorphosis.

The earlier, more realistic portion of the story aptly conveys the fragility of the status of women during times of crisis. The later, more symbolic part appears to suggest that women could evolve beyond their current situation, into something other than mere humans. This aspect of the plot is less believable.

The setting for “Gray Skies, Red Wings, Blue Lips, Black Hearts” by Merc Fenn Wolfmoor is a dystopian fantasy city where desperate people live among bizarre and dangerous creatures. A girl loses her soul, and a half-dead being agrees to find it for her. The quest leads to a former acquaintance and a demon.

This brief synopsis fails to convey the many weird and surreal aspects of the story. The author creates a strange, nightmarish mood, although the conclusion offers a touch of hope. The outré nature of almost everything that happens makes for difficult and confusing reading. Those who wish to get away from the mundane world and enter an utterly unfamiliar one would make the best audience for this eerie tale.

The very short story “All I Want For Christmas” by Charles Payseur is the winner of the magazine’s contest for flash fiction dealing with the theme of holiday horrors. A small boy who has been abused by his father imagines the rules involved in the arrival of Santa Claus, and uses them in an attempt to escape his tormentor. What happens next is left to the reader’s imagination.

Whether this story is fantasy or not depends on how you think it will end. If so, it is a minor but effective bit of supernatural horror.