Albacon is a long-running traditional science fiction convention that’s been held in the Albany, NY area since 1996. This year’s edition had author Charles Gannon and artist Stephen Hickman as Guests of Honor, and was held over April Fool’s Day weekend.

It’s a small convention, one where you get to see and talk with everyone there if you wish. I’ve been a part of the convention since before the beginning, and have been running programming for well over half of them. What we try to do is have a mix of panels; some serious, some silly, and also a mix of events.

The convention began on Friday with a Writer’s Workshop. There were various topics on the craft and business of writing, and the audience was made up not only of aspiring authors, but also some who had already been published, looking for tips and techniques they could use.

Friday evening was the convention’s traditional Ice Cream Social, with all the toppings, followed by an Art Show reception.

Traditional conventions are always looking to expand their membership, and Albacon concentrated on cosplay and costuming. This worked out well, since over a third of the attendees were there Saturday only, which was focused on events for cosplayers. We were delighted by the response; 20 people took part in our costume contest.

There also were a large number of younger people, always a good sign. 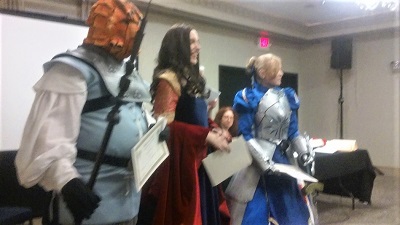 Saturday night was our Extravaganza, starting with a roast of Charles Gannon (yes, a Chuck Roast). Dr. Lawrence M. Schoen was master of ceremonies (blame him for the Chuck Roast pun), with a slide show made up for the occasion. The audio of the roast is on the Albacon web page. James D. Macdonald presented his slide show “100 Years of Dead Magicians,” a look at various magic acts who literally died on stage. Fascinating if you’re interested in stage magic.

The art show was small but with a variety not only from Stephen Hickman, but from several others in different media, including Heidi Hooper’s dryer lint art. There were only a few dealers, concentrating on books. The con is looking to find other types of dealers for next year.

Some of the panels included topics like “Lost SF Themes,” “Improvisational Storytelling,” “Fantasy from Different Cultures,” “How not to get published,” “An Appreciation of Mary Shelley,” “Twisted History,” and “Great but Forgotten SF.” Given the date, there also was a track of mythical programming in a room that didn’t exist.

Attendees agreed that they had a great time at the convention. The convention will be moving to September next year to move away from the busy winter season.