{Late October of 2014 found Gregory Benford in the wilds of South Africa. We are pleased to present his sketched notes of the trip–to be fleshed out at a later date–plus a snippet of a short story in progress written one evening inspired by his African experience.} 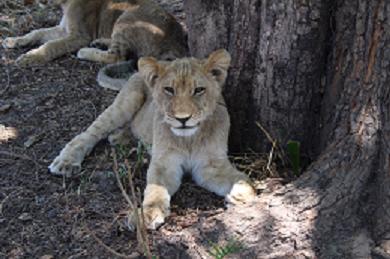 We began Oct. 19: Saw Victoria Falls today & the Zambizi river, walked with young lions, much fun. They’ve been found in the wild while still young, rescued, raised to be unafraid for the brief year or so before becoming hunting adults. Then they go to a reserve to live a proper lion life. As cubs though, they are adorable in their yawning grace.

Striking that throughout our trip, we must be escorted back to our rooms or tents, because there are wild carnivores about.

Oct. 20: Hot & gonna get hotter when we cross into Botswana tomorrow.

Oct. 21: GOOD DAY. Drank the Sancerre I toted from Paris, a cool note in the savory African dusk. Zambia, Botswana and South Africa are relatively prosperous and peaceful, far from the political madness of central Africa. Mosques are uncommon but churches are many, and the religions and tribes work well together. Guards carry .375 rifles and the occasional worn Kalashnikov.

Oct. 22: Crossed the Zambizi into Botswana, saw river life rampant, flew into a wildlife refuge for 3 days at a river hotel… Plenty to see & food is good. Animals somehow ignore us in our 4-wheelers as we gawk at giraffes, wart hogs, lions, leopards, herbivores galore.

Oct. 23: Elisabeth stayed at the lodge to go birding, watching from the veranda across a side stream of the Okavango delta—a fault-slip zone ~100 km long where rivers flow inland, making a fertile area of a place which gets only 6 inches of rain a year, yet boasts much wildlife. She sees wild dogs we’d already sighted earlier on our safari, but this time they run full tilt toward a herd of impalas. They bring down one and attack the belly, killing it in seconds and devouring as they go. Within minutes two dozen vultures arrive and black kites circle. The dogs eat, rest a minute, go back, and soon most of the impala is gone. Yum! Vultures then cover the corpse completely, a black shroud that twitches.

We sight a leopard and follow him as he runs down a squirrel and gobbles it down, then rests in the gathering heat of midday. Later, a pride of lions. Many colorful birds regard us. Each day we have a sundowner: gin & tonic, glorious sunsets, chat with the entirely American company of 17 of us.

I found the wildlife fascinating, even in the very small. I was working on a story already commissioned, set on another planet that humanity had transformed using African biology, so wrote this:

“Lydia decided to use a trick her grandmother had taught her. Take a clean bucket and place a small bright light in it, one of the sunbulbs that renews daily. Stand the bucket in the gathering twilight and as that glow fades the best termites will come to the sunbulb. She watched them, these kings and queens of the next generation, who alone among termites could fly because they evolved to spread the species to new places and build fresh gray mounds. These seekers buzzed around and plunged into the open bucket mouth, gathering close to the light. When enough of the fat, winged things—hundreds, within mere minutes—had come, she clanged the lid on. No need to add oil; the insects carried the milky grease they used to hatch eggs forth. Under heat, the buzzing motes gave up their tangy wealth and so oiled their own cooking. In a moment longer they singed a bit, sizzling. She lifted the lid and the escaping aroma tantalized the noses of all around. The Family gathered for the appetizers, adding salt to taste. All quite true of the natives around the Okavango delta. They can harvest kudu and impala, too, tasty meat for free.”

Oct. 24-26: Last bits here, morning safari, then fly into the Kalahari. Hot! Moremi Reserve dust prickes my nose & does so for days, making me run a fever. I feel not up to all the game rides. I learn that the British phrase “keep your pecker up” is actually about a bird’s beak. Arcania: The rain tree is a good marker for water and its wood will float on a stream. A tree branch tossed into a pool paralyzes fish so they can be grabbed within an hour, yet the juice did not affect humans or the flavor. The slow-setting sun casts fingers across the great plain, tricking the eye into seeing it as three-dimensional, the shadows as gloomy canyons. Threading through them is a river that gleams like an oily snake. Gray-brown kudu, longhorned antelope, wildebeests of clumsy carriage (a horse put together by committee), giraffes running with stiff-legged grace, necks teetering, the ominous black-backed jackal much like a coyote, striped zebras herding beneath azure sky, lead-colored stately elephants swatting files and sure of their immortality. Cicadas singing their eternal idiot song. Leaves on a spindly tree rattled in the arid wind, a tinkling sound like a mockery of rain. White termite hills stood like sentinels taller than humans and no doubt firmer. The vast vault of sky held drifting mountains of surly cloud. A spider like a burnt pancake with legs strode with authority down a wall. Thatched roofs and plastic buckets, drums rattling while radios blared, trucks and baboons, a clash of eras.

Twice I meet elephants on the trail back to our cabin, and quickly retreat. The last night, one stomps our solar water panels flat to get at the water, wrecking everything. If the elephant had blundered just a few meters to the side, into our tent…