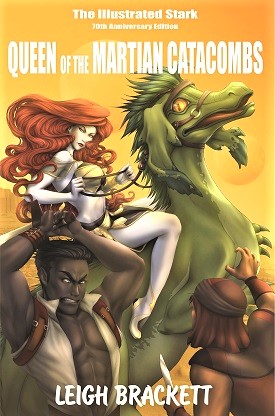 70 years ago this June, Leigh Brackett’s Queen of the Martian Catacombs ran as the cover story of the Summer 1949 issue of Planet Stories. In it, Brackett introduced the world to Eric John Stark, one of the last great pulp heroes of the era.

While Martian adventures of the 1940s were often used to explore themes of colonialism and its effects on indigenous peoples, where Brackett flipped the script was in featuring a dark-skinned protagonist among light-skinned aliens. Stark had been raised as an orphan on Mercury by the natives and given the name N’Chaka, the Man With No Tribe—his skin had been burned black by the sun. Brackett had crafted a character who was an extreme outsider among both aliens and humans in a way similar to race but beyond it. At a time when the SF pulps were exploring race more progressively, Stark was a hero who was neither white nor black, who had the fierce savagery of a Tarzan or a Conan but with no people to call his own. 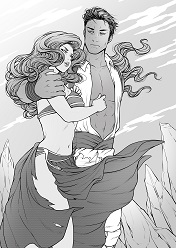 Beyond the pulp-era, Stark would go on to star in Brackett’s Skaith trilogy. Beginning with The Ginger Star, the Skaith trilogy was a scathing criticism of welfare states and could best be described as Atlas Shrugged with swords, ray-guns, weird aliens, and telepathic hellhounds. Tom Moldvay, one of the developers of Dungeons & Dragons, even created game stats for this incarnation of Stark which, for those tabletop history wonks out there, included some of the earliest D&D rules for the barbarian “rage” mechanics.

The original Stark trilogy (Queen of the Martian Catacombs, The Enchantress of Venus, and Black Amazon of Mars) used Stark as a lens for a series of character studies on villainesses and heroines. Through Stark’s own code of honor and savage virtues, Brackett explored women who were brave and cowardly, selfless and self-obsessed, calculating and passionate: the cunning and devious Berild, who hides in the shadows and behind men, waiting for the opportunity to seize control of Mars; the impetuous and brazen Varra, who is selfish and self-destructive in her pursuit of power; the courageous and confident Ciara, whose strength, leadership, and judgment redeem her and give her purpose.

These fantastic adventures showcase Brackett’s Planetary Romance at its finest, with near-immortal psychic vampires, lost alien civilizations beneath the seas of Venus, and the plot twist that Darth Vader was a gorgeous red-head! To celebrate the 70th Anniversary of Queen of the Martian Catacombs, Cirsova Publishing is releasing an all-new, fully-illustrated edition of these classic stories this summer in both individual volumes and an omnibus. StarTwo (www.startwo.net) has created over 30 illustrations (one per chapter) and new covers that pay homage to the original Allen Anderson Planet Stories covers for this new edition.