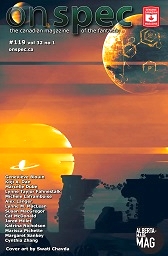 “Sins Between Man and His Fellow” by Alex Langer

“What Bones Remain” by Cynthia Zhang

“Infected” by Koji A. Dae

Eight stories, two newly translated from French, appear in the latest issue of this Canadian magazine of imaginative fiction.

“Oikos Needs Cook” by Geneviève Blouin, translated by Margaret Sankey, takes place in a near future of very high unemployment and greatly decreased public services. Many people live in modest homes with several others, raising crops and livestock to survive. The protagonist’s grandmother will die without surgery that the commune cannot pay for, and that the government cannot afford to provide. In an attempt to save her grandmother’s life, she joins a group of workers earning illegal money by going through the garbage of the very wealthy persons and making what use of it they can.

The author creates an unusually plausible dystopian future, portraying it as not entirely unpleasant, with the members of the commune enjoying sufficient food and even some access to electricity and social media. Although the waste and excesses of the rich are condemned, there is also criticism of those who insist on absolute sustainability, and how such a rigid attitude may require major sacrifices on those subjected to it.

In “Sins Between Man and His Fellow” by Alex Langer, a young woman living with her mother and her widowed grandfather discovers that the house is haunted by the ghost of her grandmother. The specter reveals the truth about her death, and exacts her own form of justice.

This is a simple, predictable tale of revenge from beyond the grave, with events that will be familiar to any reader of ghost stories. The most interesting aspect of the work is the way it portrays the Canadian Jewish community and its traditions and rituals.

“What Bones Remain” by Cynthia Zhang offers a version of the modern world where witchcraft is common. The narrator’s grandmother knows, in a supernatural way, that she will die in a few days. She becomes involved in the family’s arrangements for her funeral. In particular, her relatives will claim parts of her corpse as magical relics, especially her bones. Just before her death, the grandmother has a private meeting with the narrator, leading to a strange transformation.

Despite a somewhat gruesome premise, this story has a touch of dark comedy. (The fact that the narrator’s name is Tabitha will alert any reader familiar with the old television series Bewitched that the author has tongue in cheek.) I have to admit that I did not fully understand the climactic confrontation between the narrator and her grandmother.

“Three Knives” by Jared Millet combines crime fiction with the fantastic. The narrator’s parents had the ability to split people into two selves, and then allow one version to take over the life of the other. This also involved having the new person kill the old one. After his wife leaves him following a violent argument, the narrator raises two children alone. Bladed weapons arrive in envelopes addressed to his children. The implied threat involves the narrator with the police, as well as with the darkest part of his past.

This is a grim tale, full of characters willing to perform the most heinous acts to get what they want. The fact that the plot involves very young children suffering at the hands of evil persons is likely to disturb many readers. The author certainly creates a great deal of tension and suspense, even if reading the story is often an unpleasant experience.

The narrator of “Infected” by Koji A. Dae is in a prison cell, condemned to die. Flashbacks reveal that her husband left her for another woman. The couple had an open marriage, and the narrator claims to share her husband’s happiness at finding a new love. The man and his lover have devices installed in their brains that allow them to share their sensations in various virtual reality settings. The narrator, jealous of their mental intimacy, uses her programming skills to have the man completely forget about his lover, with devastating consequences.

The author shows great skill in telling the story from the point of an unreliable narrator who is deeply in denial about her own motivations. Once the nature of her crime becomes clear, the conclusion becomes inevitable. The mood may be too dark for some readers to fully enjoy.

In “Sales Pitch” by Michèle Laframboise, translated by the author, aliens in human form offer to terraform the Moon to make it inhabitable for Earthlings, whose home world is deteriorating. In this future, people take on the personae of archetypal characters, such as the femme fatale or the Comic Sidekick. Five such persons negotiate with the sales representative of the aliens, leading to unexpected complications.

The primary source of comedy in this lighthearted tale is the interaction among the stereotyped characters and the aliens, who also act in the manner of clichéd figures from fiction. When one of the aliens appears in the form of a 1920’s-style gangster, the story crosses the line between wit and silliness.

“Dragon’s Fire” by Katrina Nicholson takes place in an alternate version of the early Twentieth Century with the flavor of steampunk. The United Kingdom and China are allies, at war with many other nations of the world. The British know how to construct airships, while the Chinese possess the secret of producing a nonflammable gas that is lighter than hydrogen to lift the vessels.

The narrator is a young Chinese woman whose lover is a British woman. Both are nearly killed in an explosion arranged by the narrator’s father. Now completely deaf, the Chinese woman sneaks aboard a British airship in order to rejoin her lover, unaware that her father is plotting to destroy the vessel in order to start a war between the two nations.

The imaginary version of the past is fascinating, and the scenes aboard the airship are thrilling. The narrative jumps back and forth in time, which makes some sections difficult to follow. The story ends very suddenly, with many plot threads resolved in a few paragraphs. One might wish for a more extensive visit to this extraordinary world.

The main character in “Wayfinder” by Marcelle Dubé is a superhero, but one with a very modest power. Unlike her mother, who can locate anything or anyone that is lost, she only has the ability to find her way back from anywhere. She becomes involved with a missing child, who has vanished into the wilderness due to the actions of a supernatural being. Because she does not have any more ability to find a lost child than an ordinary person, the quest seems impossible.

This is a pleasant enough little tale, even if the plot is rather thin and the protagonist is mostly a passive observer of events. We’re told that the child holds the future of humanity in his hands, but this is left unexplained.

Victoria Silverwolf is of French-Canadian ancestry on her mother’s side.