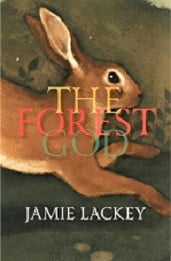 On June 5, 2020, Air and Nothingness Press released Jamie Lackey’s new chapbook titled The Forest God. The title itself intrigued me but, when I first set eyes on the cover, I must admit to feeling a little letdown. I don’t know why but seeing a hare front and center took some of the proverbial wind out of the sails of my enthusiasm. The title led me to expect something I could sink my teeth into, yet the cover art gave me the impression that I was about to embark on an adventure meant more for children and centered on forest animals more along the lines of The Wind in the Willows (admittedly one of my favorite books, by the way—just not what I expected here). Well, let me be the first to admit that I was wrong for quite literally judging a book by its cover.

Fortunately, Lackey’s story does not at all disappoint. In the opening paragraphs, we are introduced to the three central characters: the Forest God, a young apprentice witch named Margery, and a young lordling named Hugh, and thus the stage is set. Some years earlier, the Witch’s then-apprentice had run off to marry, an act that was in violation of the Forest God’s law, as witches have to bind themselves to the land and forsake all ties with others, even giving up their names and families. This betrayal by her understudy caused the Witch to abandon the village in anger, and it suffered for several years until she returned and demanded a new apprentice. It was then that Margery, a child born with less than perfect looks, had been chosen by the villagers to become the local Witch’s new apprentice.

Now a few years later, Margery is halfway through her training and headed to the market to trade for supplies while the Witch is away on other business. Meanwhile, the Forest God, recently reborn into its latest incarnation as a hare, is in the Witch’s garden contentedly nibbling on strawberries grown specifically for the deity. In the village castle, the Lord’s son, Hugh, having been assigned the task of managing the castle finances by his father, has decided to take a break from this most boring of tasks by visiting the Witch to see why his father pays her a monthly sum of gold for something labeled “GWP.”

When Margery returns from her trip to the village, she finds Hugh about to shoot the Forest God with his bow, having mistaken the creature for a normal hare. The Forest God is aware of the danger, but part of its duty is to die and be reborn. It knows that, in this incarnation, it is the prey and not the predator, so whether it lives or dies is ultimately irrelevant. Margery tries to stop Hugh but only startles him just as he lets an arrow fly, thus wounding the god in the leg. Gathering the bleeding hare into her arms, she carries it into the house and tends its wounds while Hugh looks on, much to the apprentice Witch’s dismay. In fact, he refuses to leave until he hears the Forest God itself say that it forgives him for shooting it. Irritated and wishing to be rid of the arrogant boy, Margery agrees to perform the ritual that will grant both herself and Hugh the ability to speak with the Forest God. During this first conversation, Hugh learns that the Lord must be tied to the land by the god for the village to prosper. Unfortunately, his father had committed a terrible act some years ago that caused the Forest God to reject him as the Lord of the Land, and therefore Hugh’s own claim to the title was in jeopardy. Naturally, Hugh wants to solidify his family’s claim to the lordship and demands to be told how. Concerned that the young lord may try to steal Margery’s heart like his father had stolen the Witch’s last apprentice, the god sets him three dangerous trials that he must complete before he can be accepted as Lord of the Land—trials the pampered lordling can only complete with Margery’s help.

Lackey’s story is quite good. Being a lover of fairy tales, this hits the spot for me. It’s entertaining, and it holds the reader’s attention all the way to the end. The characters are well-developed for such a short work, and it was interesting to see how they changed and grew over the course of the story, even the god itself. The only sticking point for me in terms of characterization was with the Witch. Even though she’s a minor character, she feels superfluous and slightly tacked on as an afterthought when she finally makes an appearance near the end.

As with all fairy tales, though, the beating heart of the story is a moral. Such stories are meant to teach a lesson, and the one Lackey sets out to explore in The Forest God revolves around the notion of which is more important: one’s own desires or the greater good of one’s community? It’s a simple matter of selfishness versus selflessness. The village and its people had suffered greatly for years because of the selfish actions of the previous apprentice. Many were starving. Margery and Hugh could choose to follow in the footsteps of the pair who came before them, thus dooming their village to its already steady decline, or they could remain true to their obligations and right the wrongs of the past.

In the end, The Forest God is a genuinely a wonderful read with a bittersweet ending. Readers who enjoy fairy tales and fables, or even fantasy in general, will appreciate it.