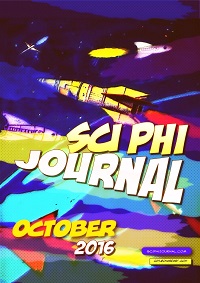 Seaman takes on psychological diagnoses with a way to internally monitor personality disorders. Despite the numerous therapies available, the plot focuses on an implanted chip that helps doctors to see how the main character interacts with his titularly named voice. For a piece of flash fiction, it delves deep into the science of the disorder, but falls short on even the suggestion of an airtight solution.

The longest story in this month’s issue tells the futuristic story of a pilot who finds himself on an alien world that bridges philosophical life and theoretical eternity. When his space cruiser crashes after an impromptu battle with some intergalactic crab parasites set on annihilating all life in the universe, Kob Agur wakes up to a monastery of interfaith priests called the Saeculum. As he works to repair his damaged ship, Kob reluctantly assimilates to the group’s ways, finding retribution in both the universal laws and himself by the end. The title refers to what Niemeier calls a cyclical view of history from the perspective of the Saeculum versus Kob’s fatalist view of his duty as a soldier.

“Blood on the Marble” by Konstantine Paradias

This alternate history fantasy tells a fictitious battle from the perspective of the commentators. Though Paradias is indulgent (one might argue overindulgent) of the excitement from such an event, his take on a period where the Spanish crusades of the New World by Cortez failed speaks highly of technologies that would not have been possible for these lands if not for international trade, something only made possible thanks to the economic efforts of the Conquistadors and their descendants. Television and broadcast media are zealously represented without taking into account the necessary advances only made possible by modernized society that has moved past the ancient rituals of sacrifice and barbary. His proposed reality does get credit for coming up with a new sport, even if it is a bit outdated even for an alternate modernity.

A short piece of flash fiction briefly fantasizes the idea of human beings as appliances to literally personify the struggles between getting up in the morning to burning toast. There isn’t much heart to this ephemeral story of a woman’s day in which everything that could go wrong does. However, it does tug at the notion of how reliant humans are on technology, and the roles it plays in our daily lives. Would have loved to see how a camera might have been done.

Something strange is afoot as a musician nervously approaches performance night, where she will be playing, among other movements and concertos, the title piece by Antonin Dvorak. Though slow to start, this story of extraterrestrial beings who make their presence known on Earth (their “new world”) through music becomes truly touching as the story progresses. Johnson’s choice of using the cello as their vehicle to be introduced through sound remarkably emphasizes how musicians and true aficionados can feel through song, using the size of the instrument and the vibrations of its strings to transcend into visibility.

“Cycles Within Cycles” by Darrel Ducksworth

Confusing take on creation and recreation as the current universe ends. With no dialogue, it’s almost like watching the first few segments of the film Koyaanisqatsi with narration. Where credit is due, though, is to Ducksworth’s deep understanding of quantum physics and the inevitable repetition of infinite events.

“The Phantasms of Tocantins” by Steve Simpson

Strange beings show up in the title region of Brazil, and the citizens cannot decide if they are afraid or curious. An overlapping timeline makes for an interesting shift in perspective, but the resolution is generally unclear. Somehow through the existence of luminous beings Simpson proposes a take on the Bilking Paradox of time travel through a story that reads almost like a copless episode of Miami Vice. Is life truly lived from cradle to grave, or was this another interpretation of the proverbial light at the end of the tunnel? Only the reader’s imagination knows for sure.

“Life of Orpheus” by Carl Grafe

In this month’s final story, a seemingly sentient asteroid contemplates its place in the universe as it is picked apart by space miners on a trajectory directly for Earth. The theme of most of these stories seems to be awareness of mortality, in this case as the asteroid realizes its fate once entering Earth’s atmosphere, but skipping the steps straight to acceptance. Is this how that rock felt in Armageddon?