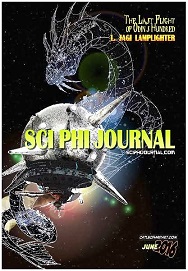 “The Last Flight of Odin’s Hundred” by L. Jagi Lamplighter

“Kill the Caretaker” by Jeff Suwak
“There is No Cause for Alarm” by Geoff Gander
“The Smallest Ships Or, How God Keeps Us All Safe” by Karen Heuler
“Legal Ground” by Gregg Chamberlain
“Xenobiology” by James A Conan
“The Curse of the Lifewalker” by Joe Vasicek

In “The Last Flight of Odin’s Hundred” by L. Jagi Lamplighter, Leif Eriksson knows full well that this may be his final battle. Flying amid Odin’s Hundred through the vast galaxies and planet-fruit of the World Tree, he is losing dozens of his highly skilled pilots to Fortune, the Gypsy commander of the Dread King’s armies. But when a desperate move to turn the tides of war unleashes a destructive force no one is prepared to handle, Leif must come to terms with his own murky past, and set aside old lines of alliance in order to save the Universe itself.

“The Last Flight of Odin’s Hundred” takes Norse mythology and overlays a science fiction skin on it. Lamplighter crafts some beautiful imagery in her reimagining of the figures and events in Norse lore, however the story itself labors under a too-large cast of characters, many of them appearing for such a short time that they are quickly forgotten in the swirl of events. The time jumps between scenes likewise make it difficult for the reader to bond with any one character or his goals, and the final reveal at the end is jarring, and breaks the magic that Lamplighter had been establishing throughout the first two thirds of the story. “The Last Flight of Odin’s Hundred” is a good story for those with a firm grasp of Norse mythology, but who also enjoy Christian theology, mermaids, samurai, and blood pounding space battles.

Aibry is being driven crazy in “Kill the Caretaker” by Jeff Suwak. The Singularity didn’t create the pitched battle between robots and humans that had been predicted. No, that might have given Aibry some direction in life! Instead it had created a robotic cradle to shelter humanity, reducing danger to zero and purpose to a pipe dream. Aibry is thus left with one, final choice: kill his caretaker Chuck, and reclaim some of what made humans human, so many years ago.

“Kill the Caretaker” is an interesting look at one possible direction that humans are taking themselves. Since much of human advancement has been toward the goal of making life easier and longer, at what point do our lives become too easy, and human beings are robbed of the agency that makes us all individuals? Suwak’s look at the future is short and to the point, giving the reader a clear story, and much to think about.

Margaret has some tough decisions ahead of her in “There is No Cause for Alarm” by Geoff Gander. The rebellion she joined after the death of her brother is taking things to the next level, and the internal government of their shelter, the Arcology, is cracking down hard on dissenters. But while rebel leader Sami seems to believe there is no act too daring or too brutal in their fight to cast off their oppressors, Margaret has her doubts, which are increasingly putting her between a rock and a hard place.

Gander starts off his story in medias res, giving the reader a taste of the fast-paced action that fills Margaret’s life since joining up with Sami. The situation unfolds slowly from there with Margaret observing her world and dishing out backstory as she goes. Unfortunately, the story doesn’t go much deeper than that. Margaret remains a lens for the reader with little of her own agency or deeper thoughts other than what other people might do, and her own indecision. The supposed oppression of the Arcology is never fully realized on the page, so the reader has trouble connecting with the rationale behind Sami and his coup. The reader is only given a bare bones reason for Margaret’s own interest, in the exile of her brother. “There Is No Cause For Alarm” is a fairly standard dystopian narrative which unfortunately lacks the emotional grab to truly invest the reader in the events on the page.

Ellen and Tara have settled into an argument over the possible existence of God or aliens in “The Smallest Ships Or, How God Keeps Us All Safe” by Karen Heuler. The cause of their spirited debate? What happens to all the bits of our skin, nubs of tire rubber and worn away shoe soles after they have flaked away? Are all the tiny microbes that consume it an act of God, or perhaps the work of tiny aliens, flying into our world to clean up our junk as a benign, yet unexplained favor. Perhaps the world will never know.

“The Smallest Ships Or, How God Keeps Us All Safe” is by all definitions a vignette. The conflict boils down to a friendly theological discussion between two friends that never gets much hotter than lukewarm. Ellen’s interest in Tara’s thesis is flaccid, and so too is reader interest in the story which never picks up much steam in its short length.

Details are important, especially if you’re going to be doing shady business with aliens within the Commonwealth of Worlds. Sebastian Sandoval finds this out the hard way in “Legal Ground” by Gregg Chamberlain. After his deliberately misleading offer to sell the Brooklyn Bridge lands him in hot water, Sebastian may start taking details a little bit more seriously.

“Legal Ground” spends a lot of time discussing the importance of details without really delving into many. The first person protagonist spends a good deal of time studying holographic replicas of antique movie posters as a means of convincing the reader how sticky he is about details, yet the lack of such scrutiny where it could have some importance in the story belies this tactic and makes the character much more two dimensional than he could have been. The story is otherwise solid, again disregarding the conspicuous lack of details that would give it the feeling of a true mystery unfolding, as is the impression given at the beginning.

In “Xenobiology” by James A Conan, neurosurgeon Captain Cohen faces the challenge—and the thrill—of a lifetime, when an extra-terrestrial crash landing presents him with the opportunity to delve into the creases of an alien brain. The only problem is the alien is still alive. Of course, being part of a top-secret government research facility, Cohen knows all about ethical grey areas, but is he, or anyone else prepared for the consequences of cutting into a mind that no one yet understands?

“Xenobiology” struggles under two concepts that don’t quite meet harmoniously in the middle. It starts as a story about surgical ethics, and where we might draw the lines with regard to sentience. It ends, however, as a morality tale about the insurmountable evilness of human nature, and our possible evolutionary redemption. Furthermore, and perhaps most disappointingly, the reader never gets to know what happens to the alien. We are not even treated to the knowledge of whether or not it dies as a result of the ethically ambiguous surgery. In attempting to tell two different stories at once, “Xenobiology” doesn’t quite complete either one of them.

Isaac knows all about loneliness in “The Curse of the Lifewalker” by Joe Vasicek. It wasn’t much of a problem in his youth when he chose to wander his small world alone, exploring and learning all that he could. But when all the people around him begin to die of the Blight that leaves him very much alive, Isaac must suffer to lose all that he loves, or choose not to love at all.

“The Curse of the Lifewalker” tells Isaac’s story from his birth until his eventual self-exile in something of a meandering, colorless style. Isaac’s boredom with his life is directly transferred to the reader through the prose and his over-educated tone. The narrative is straightforward, taking no surprise turns, and being exactly what the reader predicts it will be from the first paragraph.