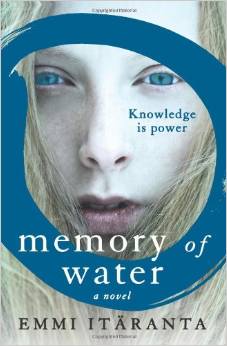 In 2011, Finnish author Emmi Itäranta’s debut novel, Memory of Water, won the Fantasy and Sci-fi Literary Contest organised by the Finnish publishing house Teos. Written simultaneously in Finnish and English and first published in Finnish in 2012, Memory of Water saw its first English language publication in 2014 and has now been translated into seventeen languages. It’s easy to see why.

Memory of Water is a rare avis; that is to say that while it is a post-eco-collapse novel, it avoids many of the pitfalls of the by-the-numbers generic dystopian scenario now worked to death over at least a century, and offers the reader a memorable work. Memory of Water takes place after what has come to be known as the Twilight Century, a minimum of at least a century following the accelerated melting of the north and south poles and struggle to claim the resources uncovered thereby, global warming having reached a tipping point and major areas of land across the planet becoming swallowed by the oceans far quicker than forecasts had predicted. Major cities and much of what they contained are long lost; the books, the technology, the crop lands surrounding metropolitan areas…all gone or rendered tainted and unusable. Clean water is now a priceless, rationed commodity and hoarding it is a crime punishable by death. (The author is careful not to cast ultimate blame for the accelerated climatic upheaval, instead assigning a character to explain that some have said it was something natural, while some blamed Man for the conditions leading to the now radically altered landscape of the planet. A wise move.)

Much has now changed from the long ago Twilight Century as the book opens. Land masses no longer resemble old maps. Geo-politics have been turned topsy turvy, especially since the oil wars and a disaster surrounding them have left even more potable water undrinkable.

The new Scandanavian Union is now under the totalitarian thumb of China and the powerful state of New Qian, where young seventeen year-old Noria Kaitio lives with her mother and highly respected tea master father in their village. Though a female, there is no male heir to learn the secrets of the tea ceremony, so Noria is left to learn the art in the footsteps of her father. Before her father dies he passes on to her the secret location of a hidden spring, where the pure water he uses in the tea ceremony can be found. He also secretly provides a few waterskins from this natural spring to members of the village to supplement their meager weekly water rations. The location of the spring is a long-held secret passed down from one tea master to the next, a dangerous piece of knowledge, for if the new military commander learns of it Noria’s family and their village will suffer harsh reprisals.

The hoarding and black market selling of water is the springboard for the major theme of the novel, which is the oppression of the people by the government, said regime needing to maintain its iron-fisted control and therefore having its own reasons for not finding a solution to the problem of clean water. The problem of clean water is so severe and rationing such a part of everyday life that the military goes to great lengths to punish even the smallest infractions, thus enforcing its absolute control over the people. When a household is discovered to have been hoarding or otherwise obtaining water above and beyond its designated ration, the military jackboots have the authority to break into a house and do whatever is necessary to locate the hidden water. Houses are trashed and a large blue circle is painted on the front door to let others know the house and residents have been marked for further punishment. Sometimes the inhabitants of a marked house are not allowed to leave their house or property until they starve to death. Other times they are simply taken into the street and publicly executed. These scenes, of armed military visiting houses and searching for any contraband water—whether evidence has been provided by a spy (a neighbor) wishing to curry favor with the government, or from mere suspicion and without due process—reminds one of Ray Bradbury’s Fahrenheit 451, where the firemen under similar circumstances ransack a suspected house in search of contraband books rather than water. The visual imagery is unmistakable.

A secondary theme is joined at the hip to that of water scarcity and that of the fascist government using it as one means to control the population. This theme is one of lost knowledge, its by-chance rediscovery, and how this “old-tech” knowledge from the Twilight Century might be the key to unlocking the deadly oppression informing every aspect of the people’s subsistence-level lives. In a general sense, the aspect of lost knowledge brings to mind Walter M. Miller’s classic post-apocalypse novel A Canticle for Leibowitz. Not with a one-to-one relationship necessarily, but similar markers are certainly in evidence here.

Noria and her young friend Sanja (who likes to tinker with shards and broken pieces of old tech gadgets in her garage) make regular sojourns to the “plastic grave.” The plastic grave is an immense junkyard piled with all manner of detritus from ages past, and is where they and others come to pick over and carry away anything they might think useful, or sell to traveling traders who wander through their village from time to time. One never knows what is to be found in this desolate junkyard. On one such trip Noria finds a cache of seven silver discs hidden inside the otherwise stripped dashboard of an old automobile. Through Sanja’s ingenuity the discs reveal the final audio journal entries of scientists comprising the “Jansson expedition,” whose long-ago discoveries might hold the key to the downfall of the current government. Noria and Sanja understand just enough of what they have heard to keep the discs a secret.

As the story progresses, we learn that Noria’s mother—due to her education in the sciences—has been offered a research position in a major city, far from their village. Noria has decided to stay with her father and become the new tea master. After his death, however, this decision plays heavily on her toward novel’s end when the discovery of the natural spring and the water she hoards for the tea ceremony has been discovered. Her house now sports the dreaded blue circle on the front door and she is left alone, unable to travel. The new military commander offers her a deal for her freedom. If she divulges a certain secret, tells what she knows, she will be allowed to live and go about her business (with certain minor restrictions). Noria refuses the offer, her only concern that of getting the discs to her mother at all cost. Sequestered in her house with even her “passpod” connection blocked and food and water running out, her only hope is Sanja and the plan they had previously cobbled together now having to be carried out by Sanja alone. The odds are slim to none Sanja will succeed, and as far as Noria knows it was Sanja who turned her in to the military commander in return for a favor for her ailing family. Treachery and despair loom large.

Despite the overarching seriousness of the global calamity and its consequences, which are given in small doses of back story innocuously interspersed when needed, the story is told on the local, the individual level, and through Noria’s eyes. She is informed by the traditions of her loving father as revered tea master and studiously learns the complicated and highly structured ceremony down to its most intricate detail—and as a female, no less—but must confront the ever-changing realities of the world in which she lives, which is in stark contrast to everything she knows. Her rather pastoral, quiet life is upended when her mother is presented with a great opportunity and for the good of the family leaves, and then again when her father dies, leaving her alone save for her best friend Sanja—and then is left with the dangerous knowledge held on the seven discs about which she must make serious choices. Noria changes and grows before the reader’s eyes, and we are given to ask ourselves if we would have the strength and wisdom she exhibits given her circumstances. We identify with her and struggle along with her as difficult decisions are forced upon her. Decisions arrived at with more than her own well being at stake, but those of greater importance beyond herself. She is a truly noble character in every sense of the word.

The author’s prose is elegant throughout, as smooth and effortless as one could want. While short on real-time violence (much of it is related in retrospect or by second parties), the novel is layered with unremitting tension on each of several storylines: Noria’s apprehension at being the first female tea master, and the taut, cat-and-mouse confrontations with the new, stiff-necked military commander who attempts to outwit her at every turn; the lengths to which she must go to hide the location of the secret spring; her seat-of-the-pants, clandestine, and highly dangerous plan with Sanja to travel cross country to smuggle the seven discs to her mother, which seems destined to fail at every turn; her final decision and thoughts while imprisoned within her own house, cutoff from the world; the calm, serene infusion of traditional Japanese philosophical thought (chapter heading quotes from ancient tomes of wisdom) contrasting with the current dire circumstances serving as emotional counterpoints; and finally the suspense created when we think there is no hope for Noria’s mother to receive the forbidden knowledge revealed on the Jansson expedition discs, and how that eventually plays out in an unexpected turn of events.

Memory of Water is a quiet page-turner, if “quiet” is the correct word. I found myself enjoying this tale of a young girl fighting the oppression of a totalitarian regime with nothing but her wits, self-determination, and self-sacrifice, and pulling it off despite the hardships thrown in her path.

Though Memory of Water paints a depressing picture of a possible future, it also offers a measure of hope. It is easy to see why Memory of Water has been so highly regarded by others, for not only was it a finalist for the Philip K. Dick and Arthur C. Clarke awards, but made the Honor List for this year’s James Tiptree, Jr. award. Memory of Water finds a way to successfully tug at the heartstrings while involving the intellect, and with grace notes (intentional or not) recalling Walter M. Miller and Ray Bradbury it more than deserves a place on your bookshelf.

Dave Truesdale has edited Tangent and now Tangent Online since 1993. It has been nominated for the Hugo Award five times, and the World Fantasy Award once. A former editor of the Bulletin of the Science Fiction & Fantasy Writers of America, he also served as a World Fantasy Award judge in 1998, and for several years wrote an original online column for The Magazine of Fantasy & Science Fiction. Now retired, he keeps close company with his SF/F library, the coffeepot, and old movie channels on TV. He lives in Kansas City, MO.