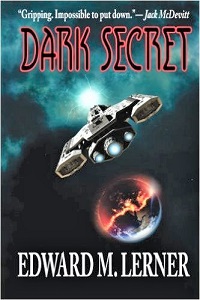 I’ve been a fan of Edward Lerner’s work for many years now, whether he writes techno-thrillers like Energized, rousing and carefully crafted space opera epics like his Interstellar Net series of novels, or writes in Larry Niven’s Ringworld universe with the highly popular companion Fleet of Worlds series. Regardless of the theme, subject matter, or treatment, a Lerner novel never fails to intrigue, engage the intellect, or offer pure entertainment for its own sake. He can do it all, and well.

Before turning to writing full time in 2004, Lerner spent thirty years in various positions in the high tech and aerospace industries, so it is no surprise that each of his stand alone novels is grounded in (as he writes in the Afterword to Dark Secret), “scientific research and forseeable technology.”

With Dark Secret (first serialized in 2013 in Analog, it makes its first book appearance here) Lerner turns his considerable talents to exploring two potentially species-threatening occurrences of the highest order: the first being the extinction of our solar system and therefore all life on Earth due to a Gamma Ray Burst (GRB) hurtling our way across space—the aftermath of the death of neutron stars some 7,000 years in our past and which event humanity quickly comes to the inescapable conclusion there is nothing we can do to prevent our extinction—unless, that is, we can recall the spaceship Clermont on a long-range flight to test the experimental Dark Energy Drive. If the Clermont can be recalled in time (which is doubtful), then stocked with thousands of cryogenically frozen human embryos, and a diverse crew hurriedly selected given the tight time frame, then at least humanity might have a slim chance of survival out among the stars, for there is no doubt that Earth, the cradle of humanity, will be no more. A terrifying prospect in and of itself, now a stark, sober reality for the crew of the Clermont.

The last half of the book is devoted to the second potentially harmful threat to our future, though it is not as devastating as the total extinction of our species at the hands of the Gamma Ray Burst. And this is: once we find a habitable planet and overcome the critical infrastructure hurdles for basic survival (aided considerably by resources available on the high-tech mothership, including power reserves, 3D printers, shuttles, etc.), and have stabilized the situation enough to systematically unfreeze the stored embryos and begin the long process of raising humanity’s children, how are they to be raised, cared for, and most importantly of all, educated? When given the opportunity for a fresh start, and with lessons learned from our own long history of failures and successes, under what philosophical, ideological, social, moral, and/or political framework will the crew of the Clermont decide to raise humanity’s offspring—especially in their early formative years when children’s minds are malleable and virtual tabula rasa’s?

With the Clermont’s small crew depending on division of labor to handle vital tasks in specific areas, the story then jumps in five to ten year intervals noting the colony’s progress, its successes and setbacks. The high-tech compound responsible for birthing, raising, and educating the growing population of children is of course routinely monitored via computer and at first with routine visits, but when certain visual and auditory anomalies begin appearing in the feeds and visits to the compound are then only grudgingly provided, then not at all, a serious problem arises when one of the rarely granted physical visits reveals that the older children are fearful of anyone not among the compound’s workers. When questioned they mouth, as if by rote, only certain phrases and answers taught them by their automated teaching texts—and the person in charge of their care and upbringing is not who the members of the colony thought she was, for she has an agenda which in its own way is as dangerous as anything the crew of the Clermont has faced thus far.

Without revealing further details, the author ratchets up the drama and growing, palpable tension with his usual aplomb, setting one barrier after another in the way of the resolution to a serious problem that devolves into a standoff threatening the continued life of the colony.

Edward Lerner gives the reader two stories here, one about the death of a civilization’s birthplace and its slim chance of finding a new home among the stars, and the other about the struggle to birth a new civilization. Both stories invite the reader to think on a larger scale, in concepts rather than on the day-to-day mundane or quotidian concerns that fuel our workaday lives.

With two stories in the telling, this reader drew two implications: the universe is a harsh, cold mistress and we had best prepare ourselves for every eventuality if we are to survive in the long run, for cosmic forces give no hint or warning when their capricious nature may strike us; and therefore it is then in our best interest as a species to look forward, to take the long view, and prepare for the worst.

The second implied warning drawn from Dark Secret deals with how our children are formally educated, beginning in their most formative years. Do we relinquish all rights to educational oversight to the public “experts” at large, or do we insist on constant vigilance as a right? Do we turn children’s education over to a single, overriding authority that decides which textbooks, methods, and viewpoints are acceptable and trust to that authority (whether local, state, or federal)? The implied question Lerner asks us to consider in Dark Secret is an important one, with obvious relevance to our current (U.S.) educational system, albeit posed through a distancing lens and in a science-fictional context where we are given the opportunity to begin a new society from ground zero. If you were responsible for educating children from infancy, what would your criteria be, your fundamental predicates and emphasis beyond the basics of reading, writing, and arithmetic (as it were)? What social or moral values would you impart to young children along the way?

I found Dark Secret a thankful respite from the prevailing SF door-stopper tomes in vogue these days (which for the most part—not always—eschew any compelling intellectual engagement, many going for various other types of resonance with the reader, which is fine, depending on auctorial intent), in that it dealt with challenging ideas in a concise manner, while never forgetting the (ofttimes) irrational or long-term destructive human element and the conflicts it brings to any given situation—which, of course and like it or not, forms the basis for any worthwhile story. This aspect—the unpredicatable human element—will provide future storytellers job security as far into the future as we can imagine, as Lerner effectively demonstrates here.

Dark Secret as a title, by the way, works not only on one obvious level but on at least one other as well, and is perfect.

I found Dark Secret to be a refreshingly hopeful vision; the important questions it raised—frightening and disturbing as they may be—are ones we ignore at our own peril. If you’re worn out with regurgitated retread dystopias, or endless tales of despair in any number of socio- or eco-disaster novels requiring precious little true imagination or deviance from the true believer party line (man-made climate change novels head my own list of cookie-cutter virtue signaling novels, all of which boringly echo the same depressing note), then I heartily recommend Ed Lerner’s Dark Secret.