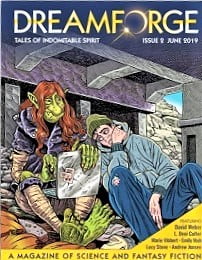 “Sid” by Andrew Jensen
“Loitering with Mathematical Intent” by Marie Vibbert
“Tea With Gibbons” by Tyler Tork
“Luna’s First Eclipse” by L.P. Melling
“I See Punk Elephants” by Blake Jessop
“Sudan” by G.M. Pereira
“Hysterical” by Gregory L. Norris
“Snow, 2562” by Michael McCormick
“We Are Cherished” by Adam Fout
“Pioneer” by Mark Gallacher
“Being Me” by Lif Strand
“Sapiens” by Davide Mana
“Haunting the Present” by Lucy Stone
“Wrath of a Lightweight” by Emily Mah
“The Weight of Mountains” by L. Deni Colter
“A Certain Talent” by David Weber (reprint, not reviewed)

The second issue of DreamForge is subtitled “Tales of Indomitable Spirit” and ten of its eleven flash pieces are placed under that heading. It also contains five original stories, a reprint, a poem, a submission guide, and an editorial. The latter is a stirring call to reason which characterizes SF&F as “the literature of ideas, not the bulletins of despair” and concludes with an Asimov quote. Given that, it was disappointing that three of the longer stories were species of fantasy and the two others had minimal sfnal idea-content. However, the flash pieces tended more towards SF. Many of the stories feature young protagonists but it wasn’t until “Lightweight” that I realized that this issue would be an excellent thing to hand a young reader with its mostly straightforward plots and prose and its abundant artwork. For other readers, the biggest flaw was that the plots were often resolved too easily but the overall quality of this promising magazine was still interesting-to-good.

Since a new print magazine is an exciting thing, I’ll briefly mention some non-literary things I noticed (though, ironically, I can’t speak to the print aspects, having read a PDF): it would help all readers (and especially reviewers) to categorize the table of contents such that the fiction and non-fiction are clearly marked; and beginning a story ahead of the table of contents isn’t ideal; the editorial’s font is odd (especially the “e”s); I dislike pull-quotes. That said, effort has obviously been put into the presentation with a lively and appealing result.

A girl whose mother is a house has problems fitting in due to that fact. This surreal flash piece is engagingly presented but resolves obviously and easily.

The cover story involves a wayward kid with an awful home life meeting a troll under the bed. They continue to meet intermittently through their lives, sometimes at pivotal moments, and become precarious friends.

This is an obviously episodic story and may be a little too “Afterschool Special” in its messaging for some (and also has a lot in common with “Home”). However, the odd perspective on the odd couple who manage to make things better despite everything against them has its appeal.

In 2250, “Mx.” is “performing gender” (being a woman) and telling us about her two dads while contemplating the Whitcher Invariant in a cemetery. When a police bot wonders if she’s loitering inappropriately, it snaps something loose regarding her inability to do creative math and become a registered mathematician.

What these two foci of the tale have to do with each other, I’m not sure. It’s also severely underplotted and resolves too easily. The title and the initial interactions with the police bot were amusing, though.

“Tea With Gibbons” by Tyler Tork

The section of flash tales begins with an interesting piece about how a couple of ex-humans are currently being gibbons and having tea while talking about all the things they might do now that they’re dead, such as be dolphins or travel to the stars.

A couple has a child but also have problems even before the mother takes the daughter away to the moon. But there is a solution in another too-easily resolved tale.

“Step away from the elephant!” sez the cop. I started laughing there and pretty much didn’t stop as we’re told how Casey was testing which punk instrumentals made an elephant happier and how that had a much greater effect than she ever imagined. The fact that a giant corporation wants her despite this being an accident seems like a flaw, but the story’s still enjoyable.

We witness some of the last male white rhino’s life from its (third-person limited) point of view. Other than some possibly unintentional anthropomorphism, this is not speculative and doesn’t seem especially indomitable.

Wanda Mae Jackson is at a doctor’s office, confused as to how she could possibly be pregnant, when she hears a voice explaining it. Science fiction (loosely speaking) and yet another easy plot and ending follow.

In three hundred words, we’re told how something nice occurs in a climate-ravaged future.

“We Are Cherished” by Adam Fout

A guide is helping a woman “translate” (a copy of her will be sent to the stars while the original will be destroyed). This is a future with an odd combination of total control of the body and no control at all over the destroyed environment, necessitating an otherworld. Generally familiar stuff and possibly inadvertently creepy to some.

This is a log entry from a Martian colonist who recounts how he got there and what he’s feeling now. To be fair, this is probably as lacking in plot as some others but it’s written very well, remarkably patient and spacious with its brief wordage, and punches my space-exploring buttons, so I enjoyed it.

“Being Me” by Lif Strand

This whale tale is a sort of combination of “Sudan” in being told from the threatened creature’s point of view (though this time fully anthropomorphically in first person) and “We Are Cherished” in dealing with the whale needing to decide whether to “translate” or to die when the sun soon goes nova. There’s a decent and balanced point to it regarding self and experience but it’s not all that thrilling fictionally.

The flash section concludes with another cli-fi piece, this time with time-travel, in which promoting diversity will enable us to survive climate change. Familiar stuff and I don’t care for the Whiggish interpretation of history (sure, “millions will die but we will survive,” so it’s okay!) but I did like that the time traveler to the past was still in our future.

“Haunting the Present” by Lucy Stone

Jocatta has PTSD after fighting a dragon and losing her father. Tired of waiting for her to return from her self-imposed exile, a couple of friends trick her into returning to the castle and her other friend, the Empress. There, the two have a conversation about her condition.

This somewhat grimdark tale is so overloaded with backstory that it seems like it ought to be a sequel but I don’t believe it is. The foreground story is as thin as indicated above. Some people may find this resonates with their own troubles and some may find it too static and maudlin but it is intense in its way.

“Wrath of a Lightweight” by Emily Mah

The kids of a Mars base have been ordered back to Earth by the Powers That Be and the kids aren’t happy about it. One’s a “blinkball” champion and uses her competitive nature to try to help herself and her friends.

While the protagonist’s situation regarding her dead brother is poignant, part of it is an awkward and unresolved fit with the main issue and that issue makes little sense (why have kids on Mars at all in this scenario?). The only necessarily science fictional element is bone density loss; otherwise this could be kids anywhere having, say, their summer camp ended. Finally, yet again, the resolution is too easy. Unlike some of the other “all ages” tales, this YA story is not suitable for adults but may appeal to some kids.

“The Weight of Mountains” by L. Deni Colter

This issue opens with a surreal tale in which the protagonist’s mother is a house and closes with one in which the protagonist’s mother is transformed into a “gulo” or a lynx-like critter when her last surviving son tries to carry the giant rope to “bind [his] land to the core” and not go spinning off into the void to whither and die. Along the way he faces many hallucinatory tests and obstacles with only his pure heart, determination, and gulo mom to overcome them and his self-doubt.

This may not appeal to those not in the market for a surreal tale and it does feel somewhat familiar (maybe a benign version of the cosmology of Kressel’s “The Garden Beyond Her Infinite Skies” {Clarkesworld #104, May 2015}) but, to those who are looking for such a tale, this should suit. The real and surreal are effectively mixed and the sensory aspects of the tale are evoked well.