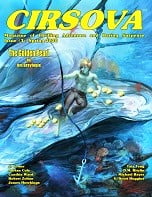 “Lest Darkness Wreck the Stars” by Robert Zoltan

“The Golden Pearl” by Jim Breyfogle

“Praying to Thasaidon” by Tais Teng

“Return of the Dark Brotherhood” by Adrian Cole

The 3rd issue of Cirsova has eight first publication stories, including two novelettes.

A sinister Shadow Man hunts Clock in this horror novelette set on Coney Island. For some reason, Clock’s patron gods aren’t warning him, but his peers do. And when Clock sees that the Shadow Man has captured two of his friends, he allows some strange creatures to help him free them.

With Jack the Ripper’s demonic spirit as his guide, Clock sets off to challenge the Shadow Man and reclaim the spirits of his two friends. But the many perils he faces will sorely test Clock’s fragile trust in his allies.

This was a frenzied tale with new characters and situations popping up constantly. The overuse of ‘Deus ex Machina’ to overcome the hurdles added to the sense of a chaotic plot.

This short fantasy is set in a land where the Elder Gods cursed the Younger Gods after losing control to them. Rhesanna is a Swordmaiden sent on a mission with her Spellmaiden partner to stop a demon. But she fails when the demon kills her Spellmaiden.

Now the banished Rhesanna seeks out the Tower of Ancient Time to free her dead partner’s soul. Soon she finds that the Elder Gods have left many traps to protect their ancient crystal tower and her quest has much wider implications than saving her partner’s soul.

This was a nicely crafted story that engaged the reader in the fate of its protagonist.

“Lest Darkness Wreck the Stars” by Robert Zoltan

Dareon and his partner have just found a priceless gem in this short fantasy. Finally, their luck is changing. All they need to do now is get the gleaming violet gem back to a city where they can sell it.

As the two men ride along the coast, they each dream that they should take the Whispering Wastes, though all knowledgeable travelers shun that inhospitable route. Over the next few days, they realize something is compelling them on toward a violet star that hangs motionless in the night sky.

The plot’s mysteries helped pull the reader through the story, though at times it seemed to drag a little.

“The Golden Pearl” by Jim Breyfogle

Mangos and Kat are searching for the famous golden pearl in this short fantasy. They have come to a secretive island where Kat heard the pearl could be found. But the local people act strangely, treating each other badly and outsiders worse.

However, an innocent small girl offers them advice as the two adventurers try to piece together the island’s story. Soon they discover that the people are ruled by a despot, one whose power hinges on the golden pearl and a spirit-girl who lives in a special tree. But Mangos and Kat are only interested in finding the golden pearl to ward off any poisons.

This was an interesting plot with engaging prose. Overall, it was a hard story to put down.

In this short fantasy Avok and Exa are drugged and shackled by slave merchants. All the slaves are beautiful women except for Avok, a barbarian fighter. But in route to the slave market a sorceress attacks the slaver’s convoy, capturing all the slaves.

The sorceress plans to sacrifice the girls to help lift the curse of bestiality from her lover. But Avok won’t abandon his friend Exa and decides to fight back for the freedom of all the slave girls.

This story was light-hearted and throughout it wavered between amusing and predictable.

“Praying to Thasaidon” by Tais Teng

Teng’s short fantasy is set on a world of necromancers and harsh gods. When a small boy’s father dies, the local necromancer comes to claim the body as repayment on a debt. But it’s too late, as the undead priests have already claimed the corpse.

Annoyed, the necromancer claims the boy, his sister, and his mother as slaves to satisfy the debt. As they are led away, the boy’s sister chooses her own path of revenge by calling on the worst of the gods for help.

This plot felt choppy and lacked story and character development.

Two space scavengers come across an old derelict spacecraft in this SF short. When Marta discovers it’s the Varangian, she knows she has found the legendary flagship of humankind’s last attempt to find a colonizable planet. Marta herself is a genetically engineered human, modified for the planet her ancestors settled.

All seems destroyed on the ancient flagship, even the AI was deliberately wiped clean. Still, the enormous ship represents great wealth for Marta and her alien partner, Chhoxa. But then they discover a stasis pod in the medical area. The pod could contain anything from an exploding nuclear device to the last pure human; dare they open it?

The story was short and easy to read giving a glimpse of a rather harsh fate for Terrans.

“Return of the Dark Brotherhood” by Adrian Cole

The witchfinder, Voruum, senses the presence of Rannas, the rebel leader, in this fantasy novelette. The big problem is that Varuum and Kaari had already killed Rannas. And yet here is his essence, threatening him and his friend.

Kaari doesn’t believe him at first, but then Rannas abducts her as bait to get revenge on Varuum. Varuum has forbidden powers, and many local officials are determined to expose him. Can he find a way to free Kaari without revealing his true powers?

This was a straight-ahead plot that was mostly predictable. The prose was unpolished.