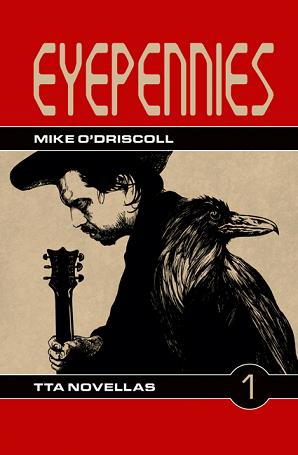 Andy Cox (editor of both Interzone and Black Static) and his TTA Press has launched a new novella series with an impressive story by horror writer and TTA reviewer, Mike O’Driscoll.

Eyepennies is an apt title for a psychological horror story inspired by, and loosely based on the life of musician Mark Linkous, who also wrote a song by that name. The author lures us in with vivid imagery. He draws us further with non-linear, chaotic sequences that mirror the hero, Mark’s, inner journey. Mr. O’Driscoll ensures that we are along for the wild ride by putting us in Mark’s head and letting us experience the creepy surreality of his life. At times, Mark is unable to tell reality from fantasy. He sometimes has moments of crystal clarity that are immediately followed by fits of forgetfulness. Moving between life and death, friends and lovers, and dreams and memories, Mark is never quite sure whether his reality is shared with anyone else, and if so, to what extent.

Mark’s ups and downs, particularly the downs, are those of a disturbed man who feels alone and scared but can’t explain to anyone else what is happening to him. Nor is Mark sure he wants to, believing that his silence and his withdrawal from people are for both his sanity and their safety. If he maintains his intimate relationships, he is afraid that the overwhelming darkness inside of him will hurt them. He has reason to be afraid and we see this when he kills three horses and his canine companion for no apparent reason.

The story builds to the ending where the only surprise is why it didn’t happen sooner and deliver blessed relief. Though this could have been a short story, the novella length is well used. In a shorter form, we might be onlookers who pity Mark. Instead, we empathize with him and feel his formidable determination to stop his inner beast from getting the best of him.