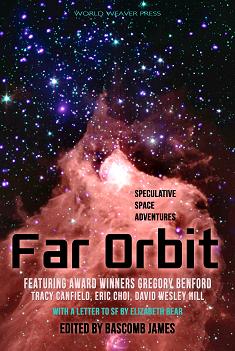 “Composition in Death Minor” by K.G. Jewell
“Spaceman Barbecue” by Peter Wood
“Obsidianite” by Kat Otis
“Starship Down” by Tracy Canfield
“Backscatter” by Gregory Benford
“A Game of Hold’em” by Wendy Sparrow
“From a Stone” by Eric Choi
“Charnelhouse” by Jonathan Shipley
“Bear Essentials” by Julie Frost
“The Vringla/Racket Incident” by Jakob Drud
“A Trip to Lagasy” by Barbara Davies
“Saturn Slingshot” by David Wesley Hill

This anthology introduces itself as, “Modern space adventures crafted by a new generation of Grand Tradition science fiction writers.”

An excellent opener for this anthology, this story tells the tale of three men who decide to make a financial killing by mining a space asteroid. First, however, they need to bring the asteroid into Earth’s orbit. To do that, they must file paperwork, get the proper equipment, and enlist just the right people to help make their dream come true. Naturally, bringing something that large so close to Earth raises suspicion at high levels. There is plenty of science here and lots of law as well. Both are necessary to this piece.

This piece of noir science fiction features Sophie Devine, a cellist and assassin who doesn’t like assholes. She has accepted a contract to kill someone on one of Jupiter’s moons. When she arrives, she must wend her way through corrupt officials, rickshaw drivers who are double agents, and addicts who would love to separate her from the Benediction tabs she was given as a way to stave off cripture. This is a fast-moving piece which felt rushed at times.

Hank has withdrawn into depression since his father died several years ago. Commander Matt Brannigan of Space Command gets trapped in an alternate reality when his ship crashes behind Hank’s trailer. At first Matt doesn’t believe what has happened. Darlene, dropping off their son, Billy, for a visit with Hank, doesn’t believe what Hank tells her about Matt. The story pushes all the right emotional buttons—making the reader want to kick Hank in the butt to get him motivated, and hoping for a miracle for Matt.

For all her hard-nosed business acumen, for as angry as she is with her ex-husband for leaving her after she lost the baby she was carrying, and for the disdain she has for her pilot who is great with ships, but doesn’t understand business at all, Janessa is a Good Samaritan at heart. This means that despite her ex, Ethan, abandoning his new wife, Avari, on a planet where a volcano has destroyed the only sentient settlement, Janessa risks her own life and profit to save the woman. This is a good story with a strong female protagonist fighting not just nature in the literal sense, but her own nature as well.

“Starship Down” by Tracy Canfield

“Starship Down” first appeared in the October 2008 issue of Analog Science Fiction and Fact. Since it is a reprint, we will not be covering it in this review.

“Backscatter” first appeared at Tor.com in April, 2013. Since it is a reprint, we will not be covering it here.

“A Game of Hold’em” by Wendy Sparrow

Matt wants a piece of business on a backwater planet. In order to get it, he is set up to play a game of poker with his contact. And he’s told that it would be in his best interest to lose. His opponent, an unrepentant slave owner and sadist, has the game rigged right down to the female slave who is the dealer. The poker game, already unfriendly, takes an interesting turn when we learn that the slave has an agenda of her own. This is a speculative variant of the “absurdly high-stakes game” trope.

“From a Stone” by Eric Choi

This is another reprint that we will not cover in this review. It first appeared in the September, 1996 issue of Science Fiction Age magazine.

Here we have opposites attracting each other. Doctor Kevin Charnelhouse and his wife, Beth, visit the alien planet called Necropolis along with the doctor’s mother, Ruth, and brother, Greg, who are also Doctors. When Ruth and Greg run into trouble at an alien burial ground, it is Beth, the mismatched wife, who figures out what is happening. The ending is a groaner.

Starship Captain Russ accepts a job transporting a live bear from one planet to another. Something about the job hits him wrong. However, it is not until he and his crew are underway that things get interesting. It turns out that Russ’ instinct was correct. The bear is sapient and did not consent to be taken anywhere. Add a reporter to the mix and things get interesting. This is a fun romp.

“The Vringla/Racket Incident” by Jakob Drud

Correspondence between one Johanna Wilborough and a babysitting service that employs extraterrestrials tells the tale here. As with any strictly epistolary tale, there is much left to the imagination. What is shared, however, reveals paranoia and a nefarious purpose behind Johanna’s request for a human sitter. This leaves us with a short humorous tale about interspecies relationships.

“A Trip to Lagasy” by Barbara Davies

This story is told in vignettes that alternate between present time and incidents that happened five years prior. Doctor Kira Walsh is on a foreign planet searching for a unique specimen of orchid when she encounters her nemesis, Doctor Jules Steger. Steger is a former colleague and lover who Walsh discovered was a fraud. He had been taking credit for not only some of her work, but also that of others. Their association did not end well. During her orchid search, Kira has a fortuitous accident, and Jules tries once again to take advantage of her. This is a story that could easily have taken place on Earth.

This story is about space pirates and the action that springs from their attack upon a space ship that is traveling through Saturn’s rings. There is a lot of science in this tale and that is a good thing. The only stumbling block here is why the author consistently refers to one of the captain’s crew as his “mother’s sister’s cousin.” Presuming that the mother and sister had the same parents, wouldn’t it be his “mother’s cousin?”

This anthology successfully captures the kinds of stories that were the gateway drugs for many of us who have been reading science fiction for a long time. Well done!