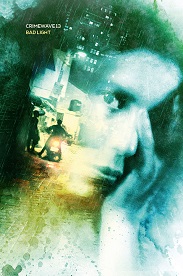 In this playful crime novelette, an economic recession is hurting Top’s criminal business of selling stolen goods. If no one wants to buy his illegal merchandise, then how can he make money? Top always tackles issues head-on, and this will be no different. He has three weeks to find out who’s to blame for the recession and then ‘convince’ them to stop doing whatever it is that they are doing.

First, Top must understand what a recession is, and this proves to be more complex than he thought at first. But his simple and refreshingly direct approach begins to clarify the situation. Now he must seek out the right heads to bash and clear up the economy.

Coward has written a light-hearted mob-enforcement story with an interesting twist. The prose supported the unusual perspective making for a pleasant read.

The shrinking population haunts a man in this bleak and psychotic near-future SF crime short. For the longest time, elderly people disappear mysteriously in his neighborhood.

The man now lives alone in his house watched by a detective who stands in the shadows outside his crumbling home. The man wakes each night and frequently slips out of his house to patrol the neighborhood, looking for a solution to the mystery. One night he decides to take action.

This story read slowly, and the author created most of the mystery through obscure prose.

In this novelette, Javier joins the Nicaraguan Sandinista rebels in the late 1970s. His parents are pro-government and unaware of his affiliation. Ultimately Javier is just another foot soldier, unsure of what he is doing, but certain he wants to help create a change.

As the Sandinistas progress towards the overthrow of the government, the young Javier finds love with another rebel and must now find a way to break away from his overbearing parents. The reality of the rebellion is brutal, and Javier soon finds himself dancing with death more than once.

This story developed slowly, but the prose was good. The pace did not pick up until the final quarter of the story.

Moore’s crime novelette tells us about Don, who moves next to and befriends a young couple, Ray and Susie. Susie is pretty, and Ray is strong and quick tempered. Don inserts himself into their lives and soon tricks Ray into confessing that he once killed a customer during a convenience store holdup.

Ray and Susie are hiding from the law, and Don helps them stay out of jail. But Don has an ulterior purpose for his help, a motive that doesn’t come to light until the very end.

The mystery in this story was palpable as the reader must wait to see what exactly the protagonist was after. A nicely crafted story.

A love-sick man can’t seem to relate well with women in this funny short mystery. His attempts to connect with his girlfriend through several Al Pacino movies results in a breakup and his joining a clandestine group of Al Pacino admirers.

It is at this secretive group that he meets Domino, the woman of his shallow dreams. The naive man thinks he is making progress with Domino who seems to be really into him, but then his dreams go badly awry.

This short mystery based its comic quality on the singled-minded blindness of the young man. An amusing short read.

“The Art of Exiting Moving Vehicles” by Catherine Donnelly

James is a year into his relationship with Gina in this short crime drama. In that year Gina has come to the realization that James is something of a pushover. But she has no idea who James really is as they speed along through the Irish countryside.

James had other girlfriends in the past, all seeming to come to a similar conclusion as Gina. But none of his past girlfriends survived the relationship with James!

Told through a series of flash-backs, the story developed at a steady pace. The intrigue was too predictable to propel the reader through the story.

In this crime novelette, Jackie returns home to look after Tyler, his mentally ill younger brother. But when Jackie starts having an affair with a police trooper’s wife, Irene, things get increasingly difficult for Jackie.

As his affair intensifies the trooper gets suspicious about the tryst and begins to pick on Tyler as a way to get under Jackie’s skin. Tyler becomes more paranoid and difficult to control. It seems inevitable that the whole situation will soon end badly.

The writing craft was okay, but the plot was predictable and the twist at the end uninspiring.

“A Grievous Burden” by Gerri Brightwell

Brightwell’s mysterious novelette starts with an Englishman visiting a poor country at the turn of the twentieth century. There to sell cloth, the Englishman struggles to make headway in this reclusive country run by a king and an autocratic military that allows no hint of dissent.

On his last day, the salesman looks forward to returning home to a culture he can at least understand. But when the train gets stuck in a high mountain pass, he encounters a well-dressed man showing signs of recent physical abuse. This stranger soon drags him into the political intrigues that infest the backwards country.

The plot was too small for this length of story, and the narrative style caused it to drag throughout.

“If I Should Fall from Grace with God” by Simon Bestwick

Linton is a corrupt English police detective in this short crime story. He falls for a local nightwalker, who asks him to investigate the mysterious disappearance of her friend.

Linton soon discovers her girlfriend became one of many victims of one of his mob boss’ depraved parties. When Linton’s boss hears he is investigating him, he arranges to silence Linton permanently. What ensues is a short but bloody war between Linton and the criminals who he is meant to protect.

This was an old-fashioned shoot ‘em up gangster story. But it read nicely, and the end had some twists in its bloody tail.

“The Art Lovers” by Georgina Bruce

Paul is a psychopath in this short crime story. He’s a struggling artist traveling around Europe in the early seventies. One day Paul encounters a strange pale man who steals a piece of Paul’s soul when he sketches him.

Soon after, Paul draws the most perfect woman from memory and then goes in search of a woman to match his imagination. Balanced on the very edge of a pathological breakdown, what will Paul do if he finds her?

The story had some mystery to it, just enough to keep the story interesting.

In this short offbeat story thirteen-year-old Michael is watching his mother waste away from cancer. The feuding between his parents quietens for a spell as they grapple with the new reality of her frailty.

Soon, the bitter fights resume, his mother continues to weaken, and Michael finds himself drifting through life. What can he do to help his mother?

Though heavy on the narrative discourse, the prose was easy to read, and the story was an interesting examination of growing up in the eastern London suburbs.

Laquita is an FBI agent searching for a vicious killer named Muir in this crime novelette. She is following a hunch on her own time in the frozen wilderness of Alaska. Laquita hires a rugged mountain man, John, to be her guide up the remote Trapper’s Valley.

As the two travel over several days, she sees signs that someone bad is in the valley. With stories about the Bushman and Billy the Eskimo, Laquita isn’t sure she can believe everything that John tells her. But soon they are both forced to work together as the unforgiving winter throws up its own challenges to their survival.

This was a well-structured, old-fashioned story about hunting down the bad guy in hostile territory, with a few interesting sub-plots thrown in.

This anthology/magazine contained a wide variety of crime-related stories, some with unique approaches to the genre. Included in the mix were a couple of gems and most of the stories were engaging. Though several stories dealt with crime in an offbeat manner, only one belonged in the speculative fiction genre.