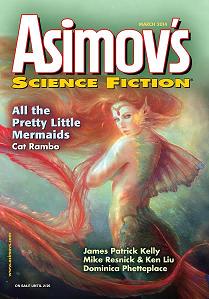 In “The Plantimal” by Mike Resnick and Ken Liu, an elderly couple has relocated to a new planet. The husband has become a hoarder as a way to hold on to memories from happier times and the wife is polite and civil, but not much more. We learn that they lost a baby long ago. For their new home, the couple goes shopping for a plant. Plants here are more animated than most on Earth. They end up selecting one that has chameleon properties. This story interweaves their present with the plantimal and the circumstances of the lost baby in such a way that even though the ending is not a surprise, one can sympathize with the couple and the choice they make.

Wallace, the main character in Peter Wood’s “Drink in a Small Town,” is frustrated by the lack of interest in his faster than light drive. He stops at a small out-of-the-way diner for a burger and a brew. The proprietor, Ray, chats Wallace up a bit and blurts several things that leave Wallace puzzled. By the end of this enjoyable short piece, all the loose ends are neatly tied.

Sean Monaghan’s protagonist in “Walking Gear” is a twenty-something named Den. He so badly wants to connect with his older sister—an amputee, prostitute, and drug addict—that he uses his professional position to get her a new leg based on alien technology. That mission is the fulcrum upon which the lever of Den’s relationships—with his sister, with his tentative girlfriend, and with his father—pivots. The speculative bits here are specific to the leg. Otherwise, this is an angst-filled story about familial relationships.

“Solomon’s Little Sister” by Jay O’Connell concerns a woman, Jean, her ex-boyfriend, Peter, and her brother, the nameless narrator. Jean comes to her brother because Peter, or a copy of him, cheated on her with another woman. Jean isn’t having it. Peter comes to apologize and Jean kills not just the first Peter who came from a spawn point, but the second and third as well. Eventually, we learn that Jean is pregnant by Peter. Another copy of Peter comes to say that he wants Jean to forgive him so that they can be a family. Jean isn’t having that either. With her brother’s help, they devise a solution that leaves Peter with a difficult choice. Because of all the copies of people and possibilities for changing one’s sex as part of the process, this one required a reread to fully appreciate the story.

“The Redemption of Kip Banjeree” by Genevieve Williams is reminiscent of Robert A. Heinlein’s novel, Friday. Like the eponymous character in that novel, Kip is a courier. An extraordinary freerunner, Kip accepts a mysterious package from some esteemed gengineers. It comes with an incentive bonus if she makes the delivery within thirty minutes. Someone other than the intended recipient is also interested in her package and chases her for it. For astute readers who follow the breadcrumb of clues along the way, the ending will be a confirmation of what you already know.

Petra Mookjai, the protagonist in Cat Rambo’s “All the Pretty Little Mermaids,” is a divorcee, a feminist, a female artist, and a mother. Her ex, Leonid, meets with her to give her a present for their daughter, Kerry—a gift of mermaids and the accessories she will need to breed and enjoy them. Kerry is away at camp, so Petra sets up the tanks and starts some of the mermaids so that they will be ready when Kerry gets home. This is a story that could have been much shorter. However, if it were, we would miss experiencing Petra’s pain and loneliness through her interactions with her ex, her friends, and her daughter.

While Cail, Akhtar, and their eight-year-old daughter, Emmy are on a picnic, Emmy wanders off and goes “Through Portal.” In this story, Dominica Phetteplace alternates the points of view between Emmy’s and that of her parents who dare not go through the portal after her, but desperately want to know what has happened to their child. This tale is an interesting intersection of the Fibonacci sequence and a Möbius strip.

“Declaration” by James Patrick Kelly first appeared in Rip-Off!, a 2012 audiobook anthology that was produced in partnership with SFWA (Science Fiction & Fantasy Writers of America). It will not be reviewed here.