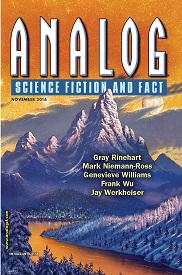 “One Man’s Dignity” by Mark Niemann-Ross

“Love Pops!” by Genevieve Williams
“The Tattling Rats” by Jerry Oltion
“The Salesman” by Garrett Ashley
“In the Absence of Instructions to the Contrary” by Frank Wu
“The Desolate Void” by Jay Werkheiser
“We Side with the Free” by Gray Rinehart

The November 2016 issue of Analog Science Fiction and Fact has seven original stories with a novella, a novelette, four short stories, and a flash fiction.

“One Man’s Dignity” by Mark Niemann-Ross

This science fiction novelette is set in the near future during construction of an Earth orbit space station. Jacob, a popular and conscientious welder, has been in space continuously for over twenty years. As he nears retirement, he fears returning to Earth’s gravity, believing it will finish him off.

When an opportunity comes his way to gain squatter rights over an old freighter, he considers using it to become the first human to try and reach Mars.

I found this story dragged along after a slow start. There was a slight mystery, but little intrigue or danger to pull the reader through the story. The ending and basic premise were both predictable and there was little in the story that explored new ideas in this genre.

The story’s background has people living in space for twenty years, plus immense space stations, and yet no government has attempted to send a human expedition to Mars. Such a background was acceptable thirty years ago, but today, we know that space exploration will not evolve this way.

Investigators have hired the protagonist, in this short science fiction yarn, to help identify someone threatening to murder a celebrity. She’s a contestant in a game show where the audience can ‘merse themselves in the contestant’s lives as they try to win the right to date the celebrity for one year.

Ambivalent towards the celebrity, she is mostly along for the ride as she waits for the assailant to reveal himself or herself. The assassin makes their move by taking over a contestant. But the authorities are able to shut them out from ‘mersing and that would seem to be the end of the case. Only it isn’t, and the plot quickly twists, forcing her to confront the assailant face-to-face.

The story has a nice pace and reads okay. It delves into areas not often explored in science fiction. Overall a worthwhile read.

“The Tattling Rats” by Jerry Oltion

“The Tattling Rats” is a flash science fiction short story about nano-technology tattoos. A bunch of high school kids come back after winter break sporting tattoos that morph across the body. But there’s a catch, the tattoos also snitch to their parents about what the wearers are doing. Evans, the school nerd, is bullied into finding a way out for the high schoolers and with the help of Amanda, he devises a plan with a nice twist in its tail.

Some interesting concepts and twists in this tale grabbed this reader. It was a quick and thoroughly entertaining read.

“The Salesman” by Garrett Ashley

Edward is a fifteen year-old growing up on a farm in this science fiction story set in 2064. His stepfather hates robots and wants his family to avoid using them or even buying anything from a store that uses them. When Edward finds a damaged salesman robot on the edge of their farm, he decides to help it, risking some friction at home.

Edward hides the robot in the cornfield for a few days during which the story gives us glimpses of life in 2064, as Edward’s older brother fights in a distant war. Eventually, someone from the robot’s firm comes by to pick up the impaired salesman and the stepfather discovers the secret, but does nothing.

Not long on action, the story is more an exploration of Edward’s relationship with his mother, brother, and stepfather. The story craft was good, but the material was more pedestrian with little here to engage the science fiction enthusiast.

“In the Absence of Instructions to the Contrary” by Frank Wu

Wu’s short SF story delves into the life of an autonomous underwater robot named Karl. Adeline, a scientist, has created Karl to stay underwater for 5-year stretches exploring the sea life at leisure and without disturbing or interfering with it. After his first 5-year stint, Adeline suggests that Karl devote some time to studying octopi. For three years he follows the life of a single female octopus who eventually self-sacrifices to help her babies survive. He caps off his 5-year stint in the ocean depths, mourning the loss of the octopus.

When Karl returns to the surface to report his findings, he discovers a world destroyed by nuclear war and the ocean life contaminated. He is alone in the world and decides to observe another octopus. But this one has mutated in some way. It no longer self-sacrifices but instead guides its babies to improve their chances of survival. Should Karl help this new generation to grow, to develop? Could they be the next sentient life to rule this planet?

A hard story to put down until finished. The writing style was engaging and the insights interesting. It brings forth the very true concept that humanity can destroy itself, but cannot destroy all life or the planet on which it lives. I fully recommend this story.

“The Desolate Void” by Jay Werkheiser

The daughter continues the work of her father, even though he abandoned her as a small child. This short story chronicles her attempt to find life on one of Saturn’s moons. Her father failed to find life on Mars and she has failed on the moons of Jupiter. Is this deep, ice-covered lake on Enceladus her last chance to satisfy her obsession? The trip down through the ice to the water is hazardous, her guide wants to abandon her, but in the end, they make it to the lake surface and its pressure of thirty atmospheres.

“The Desolate Void” is a study in human obsessiveness born from a traumatic early childhood. The story was okay, but not the kind that grabbed and held this reader’s attention.

“We Side with the Free” by Gray Rinehart

This is a science fiction space yarn. The newly formed Inner System Navy tasks the crew of the Belmont to intercept and deflect an asteroid thrown towards Earth. The Belmont’s crew embraced the new challenge despite their ship being designed for rescue operations and not for interdiction missions into potentially hostile locations.

With inadequate resources, the ship flies to intercept the asteroid thrown by the Trojans – an outer system group of miners seeking independence. Against the odds, the Belmont closes on the asteroid and works to disable its guidance and propulsion drive, finally rendering it inoperable. But at a steep cost in the lives of the crewmembers.

Rinehart’s story reads at the pace of a novel, with greater character and plot development than is found in a short story, but this is a novella and as such, this detail reads well. However, the plot is a little hackneyed. It deals with the idea of a disgruntled group deflecting an asteroid to plummet into the Earth, and the Earth sending a mission to prevent it. These are ideas that have been explored extensively in past stories and though it reads well and has a good pace and action at the end, it does not do much to forward this genre’s lore.