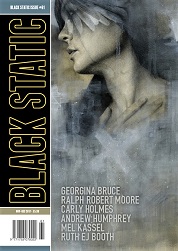 “The Anniversary” by Ruth EJ Booth

I think it is ironic in some ways that I am to again review a Nov/ Dec issue. I so very much enjoyed #55, having given me months of quiet contemplation, and yet I find myself displeased with the experience of #61. It is not to say that there were not crudities in the stories of #55, but never so prevalent as in those of #61. If in the pages of the final issue of 2016 I found an equal mix of deep profundity and psychosis-driven horror to ponder, I find far more base emotions arise from the pages of 2017’s final entries. At times crass, at others almost verbal pornography, and generally just macabre, the overall experience simply wasn’t pleasing, even to someone who generally enjoys horror literature and is fascinated by the various psychoses of the human mind. Not for the easily offended, or perhaps even for those who are not offended easily at all. The one theme that runs throughout is pitiless victimization. Graphic, bitter, desperate victimization: there is no hope to be found within these pages. Fair warning given.

“The Anniversary” by Ruth EJ Booth

Booth’s entry is by far the shortest I have ever reviewed, and yet to me speaks many more volumes than any other story in this issue, and indeed more so than a number of other stories I have reviewed. Contained within a single page, it tells the story of a relationship from beginning to end, abusive and cruel, of desire and possession turned vicious, and paltry attempts at remedy in the form of teardrop pearls, one for each anniversary. Beautifully written, it is elegant, timeless, and deeply painful in all its tragedy. It is proof that to communicate the cruelty and hopelessness of victimization, one does need endless profanity, base insults, or thinly veiled verbal pornography. There is no mistaking the pain and tragedy within the words, and the long-simmering hatred of the abused for the tormentor, culminating in a single moment of lethal vengeance. It is the high note within this issue.

“For Whom the Dogs Bark” by Ralph Robert Moore

Moore had a commentary in the beginning of the issue, and it did a pretty fair job of informing me what to expect. To quote from his commentary, “Part of art, certainly, is exposing yourself. Saying to the reader, you are not alone. You are not the only person who thought that sick thought, did that despicable thing. We are legion.” To be fair, it isn’t as though Moore failed to warn the reader in advance. It is merely that the warning was not enough, although again to be fair, I had to read it in order to review it. You, as the reader, don’t have any such obligation. The story is that of an old man at the end of his life, broken and alone, beset by demons masquerading as men, masquerading as dogs. The rather fair descriptions of what it is like to grow old and be forgotten, even ignored, and the tragedy therein of a life no longer valued as human were well done. The horror elements of the “dogs” were equally well done. The victimization is clear, from Hans’s time as a youth beset and unfairly jailed by what can only be described as organized crime, or at the very least organized corruption, to his pitiless death, alone and forgotten, helplessly blinded and crippled, at the hands of these “dogs.” All of the above are equally lost in the rest of the story, which seemed incapable of straying from incessant and pointless profanity, graphic and violent depictions of rape, and senseless callousness. To be clear, Moore is clearly a talented writer. His descriptions are vivid, his plot threads move in tandem effortlessly, and there is precious little deviation or meandering from the plot. I am sure that there are those out there to whom his words will speak. I am simply not one of them.

“The Book of Dreems” by Georgina Bruce

To say that this story is set in the future I think demeans the points it makes, which albeit painful, are well-stated and so very on-point. There are certainly futuristic elements, such as Moon travel and robotic bodies, but to focus on them seems to somehow lessen the message of the story. This is a story of what it is like to be carved out of yourself, to be abused mentally, emotionally, and physically to the point of losing all knowledge of self, and to be trapped at the mercy of your abuser with no escape or hope. It resonates on so many levels, and yet falls short. In the end, it is not vengeance and murder which reclaim the soul of someone so brutally victimized. Such things are categorically incapable of healing a soul, however desirable, appropriate, and especially needed they may be. Such things can only destroy. They do not heal, or rebuild, or grant clarity. They only remove the tormentor, which, while it is the necessary first step towards reclamation and healing, will never magically turn the abused into a whole person again. To read through such a deeply personal and vivid account of depersonalization, to feel the disconnected psyche and hopeless grasping for identity, so well-written, and to have it culminate in a tired and weary attempt at empowerment via killing, and to see that moment portrayed as healing in any way, simply belies the truth of those who have suffered in such a way: that while anger and retribution are necessary factors in the grieving and healing process, the journey does not end with the death of the abuser, nor does their death suddenly bring life and healing back to the abused.

“Do Not Google” by Andrew Humphrey

This is a tired amalgamation of tropes. It failed to pull me in at all. The characters are one-dimensional, often lacking any form of self-awareness, and again is riddled with profanity, the only point of which seems to be to illustrate just how genuinely awful the characters really are. To be clear, it is not profanity that I object to. It is profanity without, or perhaps exceeding, any reasonable purpose. Drugs, meaningless and unfulfilling sex (which is somehow supposed to have consumed the desire of the main voice), and a couple of sociopaths form the meandering and mostly non-existent plot. Thrown into it all is the ancient adage of not appreciating what you have until it is gone, mashed up with a modern technical evolution of the apprentice’s curse, a spell in a forbidden tome, that once begun to be read, must be read backwards or the reader be compelled to complete the spell and unleash some horror. In this case it is a scrawl of symbols on a torn and dirty scrap, that must not be googled, yet as long as it is in your possession will quite aptly possess your will, wearing away until you find yourself committing the sin in a moment of weakness, like an alcoholic who is unable to ignore the one last bottle squirreled away in a cabinet that breaks years of sobriety. To google the page is to cause the death of the one you love most. The only things surprising to me at all was that when the inevitable occurs, and the symbols are entered, the main voice isn’t the one who dies, since the only one he seems at all capable of loving is himself, however little even that might be.

“A Small Life” by Carly Holmes

The story itself is slow-moving, almost overweight, and lacking any enthralling characters. The main voice is bitter, unlikable, and utterly devoid of any redeeming quality. The others are one-sided, clueless, oblivious, or simply single-minded and incapable of any real comprehension. There’s no real temporal markers to grasp onto, other than the mention of a street lamp marking the story as post-industrial, and overall the story is mostly just depressing. Not scary, or macabre, or even psychologically driven. Just depressing. There is some slight intrigue as to the nature of the hidden creature that the main character sees throughout, who carries the girl away in the end, but no real attention whatsoever is given to it, and the existence of the creature seems entirely inconsequential, as if the story could simply exist without it. The only plot seems to be that of a flirty, foolish girl somehow obsessed with a foul-tempered, abusive lout, and how it ultimately gets her offered up as a sacrifice to some ghastly creature by the lout, who never even hesitates to throw her away, hating even her presence.

This is perhaps the most interesting and coherent of the stories in #61. It follows the ghost of an old woman murdered by a neighbor, drowned and spirit-bound by arcana to a koi pool. Her body is held inside the house in a tub upstairs, while her spirit is imprisoned in a get-rich scheme of a late-generation, down and out wizard, who somehow manages to keep justifying his crime and keeping her around. The idea is for her to force the koi, which only spawn twice a year, to spawn frequently, for the purposes of selective breeding. In other words, the whole point of the scheme is to create unique looking koi to sell for profit. The garish victimization for profit is just that: garish. Yet the characters are more alive, more filled-out, and given more motivations than any of the other stories. In the end, though, she finally manages to free herself by possessing his body, made possible by forcing the koi to spawn so furiously that the runes forming her prison are obscured, and drowning the wizard in the tub where her body has long since decayed. She merely dissipates, grateful that her mind has degraded so much that she has only the fleeting seconds-long memory of the koi.