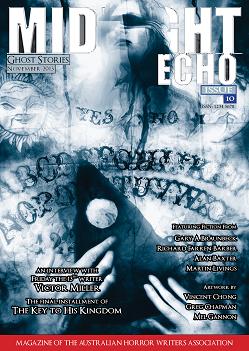 Midnight Echo is the magazine of the Australian Horror Writers Association and is published twice yearly, May 31st and November 30th.

“Lunch” by Joseph A. Pinto

Robert mourns his son Sean’s death so obsessively that his wife Karen finally issues an ultimatum. Guilty hallucinations and what might be a genuine ghost eat away at what’s left of Robert’s sanity. The truth behind the exact circumstances of Sean’s death are revealed. Up to that point the story had been working for me. A sudden change in character and motivation appears out of nowhere. If those had been grounded in a better set up, the ending would have really had the effect it was designed to produce.

The story opens with an explanation of the urban legend about what happens if you drive your car to one of the twenty-four “crybaby bridges” in the state. There’s another bridge, the twenty-fifth, that no one knows about other than the man who drives across it on this dark and stormy night. Old, dried up, hagridden, he goes through the required motions to lure the baby ghosts into appearing, all the while having a one-sided conversation that explains his tragic reasons for being there. The story is very short. More background on the old man and exactly why he was compelled to go to the bridge at this point in his life might have added depth and fresh insight to this familiar horror scenario.

An old man tells the story of how he dies of a heart attack while living alone. His body is taken away, his belongings are all packed up, but his ghost remains behind. He’s there to witness other deaths in the house and the noisy anguish of ghosts who don’t want to believe they’re dead. All the old man wants is some peace and quiet. One night he finally has enough and discovers he can do something about the noise. What he does brings new terror to being caught in this world after death. What makes this story so creepy is how easily one can sympathize with the old man’s plight and his desperate wish for all the noise to stop. The end reveals who the old man has been telling his story to and why. That twist puts the final shiver into a great ghost story.

“I Want To Go Home” by AJ Brown

An old man dying in a nursing home sees the ghosts of a janitor and a former patient. He just wants to go home, to get away from the nurses and needles and being trapped in that place alone. He gets what he wants, but not quite the way he wants it. This is depressing and all too realistic. It’s also very familiar and not that scary.

A couple take a tour of a castle ruin. The tour guide keeps assuring everyone that they will very likely see some type of supernatural apparition. The couple is skeptical, yet hopeful as they move through the castle. The couple’s mounting desperation raises the suspense of the story. What the couple is really hoping to find comes as a poignant twist.

“Blood and Bone” by Robert Mammone

It’s become a new hallmark of horror stories to check for cell phone reception. If you’re not getting any, run for it and don’t stop to pack. Don, Diana, and their daughters Ella and Pam are on a family outing. They decide to stop at “The Satyr’s Rest” for a Devonshire tea. Turns out this place also features “one of the largest hedge mazes in the state.” Of course the girls want to go inside. Too much of the story is spent getting Don and the girls into the maze itself. From that point on events resemble a weak cross between Harry Potter and the Goblet of Fire crossed with M.R. James’ “Mr. Humphreys and His Inheritance.”

A model dying of cancer gets a “cunning woman” to help her deal payback to a sleazebag photographer. This is a revenge story, pure and simple. The most interesting aspect is the way a practitioner of sympathetic magic has to upgrade her skills in the digital age. Once again, a premise with potential that’s ruined by flat characters and inadequate back story.

Paul and Laura buy some land, intending to fix it up. While he’s mowing the lawn, Paul hits something that jams the blades. He discovers fragments of what turns out to be a skeletal hand with a fine ring on one finger. Never having had the money to buy Laura a decent ring, Paul pockets his discovery. That skeleton leads to the discovery of a dozen others buried round the base of the Hickory-Pecan hybrid tree. George, previous owner of the land, sees to the removal of the bodies and their burial in the local cemetery. George warns Paul that moving the bodies is bad luck. That appears to be true as the grass dries up, the pond drains, and the land in general begins to fail. Those are just the symptoms of a much deeper and more dangerous problem. The restless dead come back to claim more than just the missing ring. The implication ending is very hard to believe given that it’s also highly improbable and unrealistic. If Paul had carried through on what he intends to do, that would have provided the gruesome touch that is the hallmark of the Southern Gothic story. That scarcely matters, given the glaring logic flaw in the story. The discovery of anything like a “body farm” would bring in everybody from the local police to an FBI task force wanting to ID the bodies and search for any others. George alone cannot oversee the unearthing and reburial of the bodies. The officials in charge of the local cemetery would not accept the bodies without the appropriate paperwork. What they would do is notify the local authorities. George, his crew of body snatchers, Paul, and Laura would face serious charges.

“A Little Peace” by Rebecca Fung

The protagonist moves to a quiet neighborhood due to his heart problem. His host is the soul of consideration. Unfortunately, the protagonist’s peace is disrupted by the persistent appearances of a ghostly little girl named Paulina. After some effort at communication as well as local investigation, the protagonist discovers why Paulina is haunting him and what she wants from him. Paulina herself is the most well-rounded character in the story. Otherwise, this is an unsurprising example of “The road to hell is paved with good intentions.”

Ed Gein fans, take note. Clark, the protagonist, is cut from the same fleshy cloth. He’s haunted by the ghost of his hateful, possessive mother while he gets ready for the date he hopes will break the cycle of loneliness and resentment he’s been trapped in thanks to Mother’s refusal to let go. Anybody who has seen any of the movies based on Ed Gein’s tortured upbringing, his mother fixation and the horrifying acts he committed because of them will know what’s coming as this story unfolds. The one noteworthy aspect is the story structure. Each scene takes place in a different room of the house and is titled accordingly. That reinforced the overall theme of Clark being surrounded by his mother’s relentless presence.

The precise nature of protagonist and victim aren’t entirely clear. My best guess is a shapeshifter turns the tables on a serial killer. The premise held some promise, but the execution lacked depth and creativity.

“It’s Always The Children Who Suffer” by Alan Baxter

Little Sophie’s nightmares seem to be fueled by the ongoing battles between her parents James and Helen. James does his best to soothe his daughter while Helen appears to be out having a fling. When Sophie starts showing bruises and even some scratches, James wonders if Helen’s resentment has found an outlet demanding immediate intervention. The characterizations are strong here, but the hints about the possible supernatural nature of Sophie’s nightmares and wounds don’t add up. At one point her teddy bear seems to be the implied source. The climax of the story fails because James has been established as a parent who would not go on waging verbal warfare against Helen while Sophie is upstairs screaming in mortal terror. Yet that’s exactly what happens, a contrivance that prevents Daddy from coming to the rescue until it’s too late.

Kelek violates the Sultan’s edict by allowing Danzad and the members of his cavalcade to take shelter in Kelek’s home rather than risk dying in a violent sandstorm. The Sultan’s guards arrive the next day to salt Kelek’s well and poison his farmland as punishment. Kelek and his family are forced to follow Danzad to the city of Darquesh where Kelek might find work. Undeserved tragedy continues to strike Kelek’s family, driving him to decide he must assassinate the Sultan himself. When Kelek attempts to carry out this mad plan, luck finally seems to be with him. That turns out to be one more broken dream. Good worldbuilding, strong characterizations, and surprising plot twists. The feel of this story calls to mind the work of Robert E. Howard and C.L. Moore.