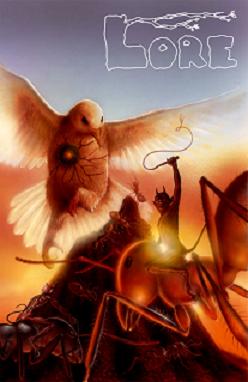 “One in a Billion” by Colin Heintze

“Electric Souls on a Starless Planet” by J.P. Boyd

“Lost in Darkness” by Jeremy Harper

“Can Spring be far Behind?” by Jeff Samson

“Tumor is the Night” by Corey Mariani

There is a difficulty in reading “Enshrined” that comes from good writing. Sala leads a group of children up a hill to a shrine. They are battered, bruised, and injured. They are victims, and the shrine is for them. There is a strong sense of empathy evoked by the prose as the reader discovers their ill fate. Questions arise as well: Is a memory alive? What is the connection between remembering and being remembered? Is closure abandoning the past? Enshrined brings a perspective rarely seen and one worth experiencing.

“Finny Moon” isn’t the story of the one that got away or the big catch. It’s both, but really it’s the story behind the story. It’s not what’s told at the bar over shots of whisky, it’s the story itself as it’s happening. And the catch? The big one? A fish from the waist down, a woman from the waist up. So what does an aging fisherman and his drinking buddies do with a mermaid? Well, after tossing around ideas like selling the edible part and selling it as a miracle of nature, they fight just to hang on to it from what’s come after it. It’s a fun read with loads of personality.

“Congregate” is an introspective search for meaning. When word spreads that an event of Biblical proportions is coming, masses of people congregate expecting deliverance and ascension. Jamie wonders where he fits into it all. His life probably didn’t lead him to salvation, yet he can’t help following the crowd. Jamie’s story is more of a meditation than anything, and doesn’t really take the reader anywhere.

“One in a Billion” by Colin Heintze

2D-living has become a thing of the past. Gravity is controllable and has become the solution for overcrowding. Lee lives in this world, but he doesn’t know where, or on which axis, he belongs. His father leapt to his death, jumping from The Hive, falling in any number of directions before being struck and killed. Lee tried to follow in his father’s footsteps, but miraculously found his way to the ground safely; it was one in a billion. Now he wants to take that bit of luck and use it, to finally find his place in the world.

Descriptions come in the form of futurespeak—using futuristic terms, ideas, and objects—and so it all feels very much in the realm of cyberpunk. But the prose isn’t overcomplicated and doesn’t slow the narrative down. It’s a pleasant read and an interesting concept, to the point that it might have been better used to tell a more intriguing tale. That being said, the simplicity of the plot doesn’t necessarily subtract from the experience. It’s a good read.

Monsignor Rossi is in danger. A string of missing and murdered priests has panicked the church. One such priest—Davies—comes to him seeking asylum, because he too is in danger, and is dangerous. He carries within him the one responsible for the murders, the one he calls Smith. The demon.

“Asylum” is a gruesome tale, but one that never develops beyond its premise. The writing is promising in the first few pages, so the progression (or lack thereof) of the plot is disappointing. It finally boils down to the baser shticks of the horror genre, simmering away rather than thickening.

A man who simply calls himself The Traveler comes upon a man in need in the forest. This man is Amedelar and he carries a pendant and a story: the story of The House of Dreams. The House, he tells The Traveler, feeds and feeds on imagination. Many have come to the House, and many have gone, but those who have gone are still there. In his troubled condition, he asks The Traveler to take the pendant and burden it holds.

The story told by Amedelar is more interesting than the one told by the author. It’s a shame it was not the main story, or that The Traveler’s story doesn’t build on it. It seems a missed opportunity to delve deeper into the House of Dreams.

“Electric Souls on a Starless Planet” by J.P. Boyd

Maeve and her ship are hunted by the Han—a dinosaurian, warlike race. Her ship crashes onto an anaster—a living planet created millennia ago. Maeve, along with Toth—a member of a turtlelike race, and David—a sentience on his way to atheistic cyber-heaven, must find a way to survive their powerful pursuers as they delve deeper into the planet and uncover secrets of its builders.

This feels like it’s part of a larger series, but is also pleasantly self-contained. The characters have personality, and their situation is tantalizing. A good read through and through.

“Lost in Darkness” by Jeremy Harper

Valentine is the hero. He wears the role as well as his boots, hat, and cloak. He fights darkness with incantations of light and a deadly blade. But when he ventures into the very heart of darkness, only to find illuminated thought, he is left unarmed and unsure. If a man is measured by his accomplishments, will Valentine still be the hero when all is said and done?

“Lost in Darkness” is fashioned by a seasoned hand. Valentine is both a new and familiar character within moments. He is powerful and thoughtful, and manages not to fall into many heroic stereotypes.

There is a house, and to say it is in disrepair is an understatement. Melbourn visits the house each year, not to see the house itself, but to see its ghostly inhabitants: those whose lives he took, and from whom he seeks forgiveness.

The story is a jumble of memories of who the spirits were and how and why Melbourn killed them. But it is told in too sterile a manner, so much so that there is little for the reader to grasp onto from an emotional-investment point-of-view.

“Can Spring be far Behind?” by Jeff Samson

The tone and purpose of this story is difficult to pin down. It boils down to two friends—Brian and Jurgen—living together in a hinted-at post apocalypse. Brian loves to write science fiction, and Jurgen loves to read it. They help each other survive and that seems to be the crux of the story. That being said, there are some questionable choices made in the telling of the story that may put some off.

“Tumor is the Night” by Corey Mariani

Marissa and her daughter, Tammy, live by a creak. The rest of humanity lives on beaches, where the locust plants can’t grow. Marissa is also insane, which makes life difficult for Tammy. When Dan, a man from their past, arrives, bearing a throbbing locust-filled tumor on his cheek, revelations are made and the value of their lives is changed.

Once again, this feels like a story in progress; a snippet that is taken out of context without enough weight to survive on its own.

The frame story of “Nzambe” tells of a general looking to hire mercenaries to quell the rebellions in his country. He brings a woman named Pauline to his estate to discuss the matter. However, it is Pauline who takes over the narrative, informing him of her transformation into immortality, and eventually why she really came to meet with him.

There is a nice mix of history and fiction in “Nzambe,” and it is apparent, as Pauline’s story goes on, that the frame is not there for any reason other than to give her story a satisfying end. It does this, but at the cost of too many words lost in details for characters not developed beyond their archetypes.