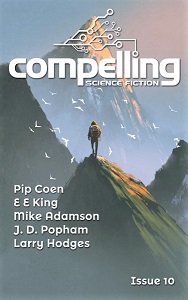 The 10th issue of Compelling SF has five original stories, including one novelette.

Coen’s SF short introduces Nat, a scout spaceship’s medical doctor paralyzed by an alien microbe. As Charlie, her husband, and Kim, her medical assistant, try to discover what has happened, Nat begins communicating with the microbe, who she dubs Fourteen.

Slowly, she discovers Fourteen wants a symbiotic relationship and can enhance her body’s capabilities. The challenge for Nat, and later her husband, is whether they should accept this relationship or try to purge Nat’s body of Fourteen, regardless of the risk to Nat.

With more twists than the Hampton Court Maze, this story moved rapidly. Each twist came while still digesting the previous one. And the writing craft ensured this was a real page-turner to the very end.

This short fantasy is about Maria, who sees a manifestation of the Virgin of Guadalupe in the plaster outside her apartment in a Mexican pueblo. Over a brief time, the image of the Virgin grows, and soon the religious symbol commands the devotion of all the villagers.

The image continues to grow both in size and in its vibrant colors. Other villages begin to see similar images. The religious significance consumes the whole region, even as the people gradually sicken.

This was a nicely written story.

“Hostile Intent” is an SF novelette about Celestial Resources, an interplanetary company that is under attack from somewhere. Olivia Desmond, the operations executive, begins a thorough investigation into who has redirected a satellite to collide with Celestial’s tactical satellite.

When the evidence begins to trickle in, Olivia realizes it points in a direction she never suspected. At first, she questions the well-hidden clues, but soon she must make a difficult decision to follow the evidence.

This story started slow and ground its way through the whodunnit plot. The twists at the end were not hard to predict.

James, the last robot, wants out of the museum, in this SF short story. Effectively a prisoner for the last forty years, James hears that his creator has just died and now he must escape or face termination. In this future, all the robots were banned because they took work away from humans.

As James makes his way out, he discovers that one of his guards is the new cyborg-like robot, that is also illegal. James quickly finds himself in a race against the cyborgs to make good on his escape and fulfill his destiny among the stars.

Popham spins an interesting and quick insight to a future with robotics forced underground. The story read okay.

A strange future is the setting for this SF short. Mesen, a Dooger, is taking a census of eight billion humans living on Earth. Equipped with a ‘redo’ button, he resets time back after each interview. The ‘redo’ locks the Earth into the same thirty minutes, while the universe moves on eighty-three thousand years. Unbeknownst to Mesen, an alien fleet arrives to eradicate all life on Earth, but once they approach Earth, the ‘redo’ constantly forces the fleet to repeat its advance into Earth orbit.

As a giant ten-foot caterpillar, Mesen creates quite a stir among Earth’s population, but the ‘redo’ means each person forgets about him after meeting him. But then he meets Jill, the first human who seems unfazed by his presence. Mesen decides to stay a while and talk to her. But as time passes without the ‘redo’, things get complex.

Holmes has spun an interesting and unique yarn with a tongue-in-cheek feel. It was an enticing read.

[Editor’s Note: With this Winter/December 2017 issue, Compelling SF switches to a bi-annual publishing schedule, future issues to appear in June and December.]