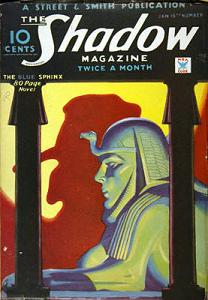 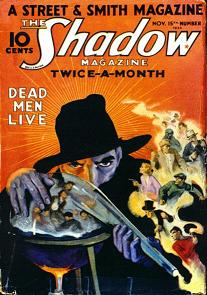 Howard Carter and George Herbert discovered the tomb of King Tut, the boy king, in 1922. It generated worldwide interest in things Egyptian. Probably to keep interest alive, newspapers began to run stories about the so-called “mummy’s curse,” though evidence has shown that the deaths of those entering King Tut’s tomb could easily be attributed to natural causes. Nevertheless, the myth of “the mummy’s curse” has persisted to this very day, spawning countless stories and movies, with The Shadow being no exception. It’s simply a terrific storyline that writers and filmmakers have found irresistable and to which they continue to explore in seemingly endless variation.

“Tomb of Terror” deals with a mummy’s curse (though not that of King Tut), and it is up to the Shadow to determine the nature of said curse, for it is a fact that all who look upon this particular mummy perish almost instantaneously. A difficult challenge indeed and a worthy one for the unmatched skills of the Shadow–if he can stay alive.