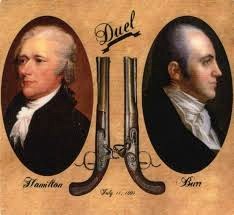 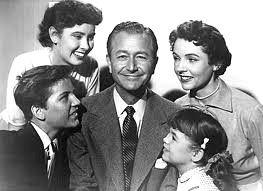 Suspense (1940-62) aired “A Friend to Alexander” on August 3, 1943 as episode 52 of its almost 1,000 episodes. Adapted from the James Thurber story of the same name, it tells of a contemporary man haunted by a recurring dream, a dream turned to nightmare as he is thrust backward in time to that of Aaron Burr and Alexander Hamilton and their famous duel. His dreams intrude into his present reality with such force that he can no longer tell them apart. His unstable psychological state threatens to unhinge his marriage, but that is the least of his worries, for his obsession to avenge Hamilton’s death in his dream world leads him down a dark and dangerous path in the real world.

Starring beloved film and TV actor Robert Young (1907-1998, Father Knows Best and Marcus Welby, M.D.), “A Friend to Alexander” was but one of his many radio roles keeping him busy between films during the 1940s and ’50s.

(The Hamilton/Burr duel took place in 1804. Hamilton lived for 31 hours after being shot by Burr.)