Bulldog Drummond (1941-49) aired “The Case of the Axis Submarine” on September 20, 1943. A bit of trivia associated with Bulldog Drummond is that it was one of three new shows creator Himan Brown was hoping to interest radio stations into carrying. One of the other two shows happened to be a little something Brown called Inner Sanctum, and while Brown’s lead product was Bulldog Drummond, it was Inner Sanctum that sold first, leaving Brown to pound the pavement in search of a home (which he obviously eventually found) for Bulldog Drummond.

If you like James Bond you’ll find a lot to like in Hugh “Bulldog” Drummond’s adventures. Bulldog Drummond was the character created by Englisman H. C. McNeile (1888-1937, photo top right), who wrote under the pseudonym of “Sapper,” Sapper being the official term for those serving in the Royal Engineers during World War I, and the name suggested by McNeile’s publisher in order to lend the stories an air of authenticity. None other than Ian Fleming, creator of James Bond, wrote of Bulldog Drummond’s author that he was “Sapper from the waist up and Mickey Spillane below.” The third Bulldog Drummond novel, The Third Round (1924), gets into Bond territory (and SF) with some pseudo-science involved in the creation of synthetic diamonds. Arch nemesis, and identity-chameleon Peterson is back, whose only desire is to exploit the discovery. Sapper is getting the hang of how to write these books by this time, and it shows. These first four Drummond novels are known as the Carl Peterson Quartet, and are recommended for their action, plotting (in most cases), wild adventure, and a hero who knows good from evil, is smart, but hardly handsome, and is definitely a product of his time (that of post-WWI England, with its prejudices and views of those nations from which it has just emerged from a devastating war), and of Sapper himself, who puts much of his own military experience into the books, and surrounds Drummond with fictional army pals including his best friend Algy Longworth, his manservant James Denny, army buddy Peter Darrell, and other series regulars Toby Sinclair and Ted Jerningham. The Carl Peterson quartet of novels are collected in one volume by Wordsworth Editions (2007, 768 pp., though Amazon incorrectly has it at 320 pp., cover above right) and can be purchased via Amazon here.

“The Case of the Axis Submarine” is, like the bulk of these Drummond adventures transplanted to America, toned down from the original novels, for the novels pulled no punches and were filled with violence and graphic gore. Also missing is the larger cast of characters surrounding Drummond in the novels, for with radio it was more difficult to keep characters straight with only a voice to recognize them. In this respect Bulldog Drummond was like other radio shows (the short-lived and unsuccessful Doc Savage radio show from 1934-35 comes to mind, though no transcriptions are known to have survived, only historical accounts) whose cast was trimmed to better identify characters. “Axis Submarine” begins with a plea for help from one of Drummond’s friends, a woman distraught over the recent murder of her night watchman husband, and ends in a desperate struggle to thwart the Nazis during World War II. Many radio shows turned their scripts and heroes to fighting either the Nazis or Japanese during WWII and Bulldog Drummond did his part as well. So get set for a taught adventure as Drummond and faithful manservant Denny find themselves involved in “The Case of the Axis Submarine.”

{September of 1943 found the world at war and many radio shows and magazines (genre or not) shifted their emphasis to reflect this state of affairs. It was all anyone could talk about, and rightly so. Our nation was mobilizing on the home front as well as the battlefield. When the neighborhood gang mustered for their trek to the corner newsstand, some wanted nothing more than to escape the war talk and would choose a reliable monthly SF standby, Astounding. After listening to this Bulldog Drummond tale of submarines and espionage, another youngster opted for more excitement and adventure with the current (also monthly) issue of Doc Savage (which also featured a submarine), and yet another wanted nothing more than to immerse himself with more war stories and chose Fighting Aces. Astounding (now Analog) began in 1930 and still publishes today as the longest running SF magazine in history. Doc Savage saw its first issue in 1933 and its last in 1949. For all but the last three years it ran as a monthly. And Fighting Aces saw published 27 bi-monthly issues from March of 1940 through July of 1944. The issue spotlighted below was the 5th to last of this popular war magazine. It was among many magazines of the time to promote the buying of war bonds on their covers.} 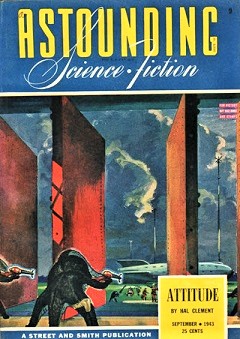 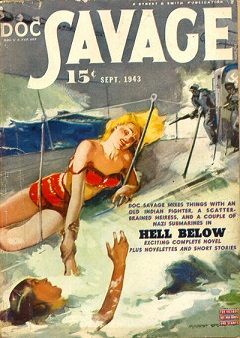 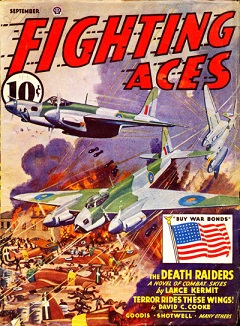