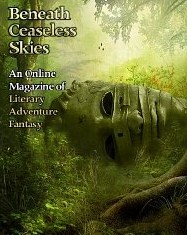 The April 19th issue of Beneath Ceaseless Skies concentrates on a couple of very ugly worlds for the background of their stories.

“The Ivy-Smothered Palisade” takes the form of a letter from Daeliya, a woman who has managed to escape her terrifying past and make a new life for herself.  But she is forced to return, and to explain to her lover Eyan why and all the things he doesn’t know about her.  What follows is a tale of fear and terror, and of her meeting with a man in a mysterious castle to whom she owes everything.  Mike Allen creates a very convincing world and strong and memorable characters.

Christian K. Martinez sets “Pridecraft” on an Earth that has long ago been conquered by the Dani.  It’s told by Engineer, a human who, like everyone else, is trying to survive under these cruel masters.  He helps keep the trains running, and finally has had too much of the Dani’s gratuitous cruelty and decides to react.  The Dani are painted in one shade of black and, other than the futuristic, this story could easily have been historical fiction set in a Nazi occupied country.  I think it piles on its point a bit too much and resolves things too easily.