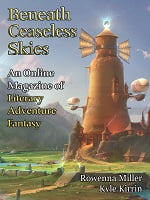 “Nameless in the Winged Court” by Rowenna Miller

“The Petals of the Godflower” by Kyle Kirrin

The 292nd issue of Beneath Ceaseless Skies has two original stories.

“Nameless in the Winged Court” by Rowenna Miller

The king of the Winged Court renames Floret, the flower girl, as Majya when he marries her in this short fantasy. Though she was born without wings, the king has ones taken from a moth and attached after their wedding night.

Majya knows not the history of these moth-like people and the king’s other wives shun the king’s new favorite. Her only friend is the swallow that brought her, and he soon flies north when the summer comes. Her homelands beyond the court continue to entice her wistful interests, much to the king’s displeasure.

The plot lacked any pull and the prose was too slow to engage the reader in the character’s destiny. And in the end the story felt unfinished.

“The Petals of the Godflower” by Kyle Kirrin

She has no name, until the Godflower gives her one in this short fantasy. But the Godflower hasn’t talked to her, not even the one blooming above the body of her brother, who committed suicide yesterday. The same fate awaits her, to sacrifice her body for the people, so a new Godflower can grow and feed the people.

The priests have belief in the practice, she does not. Unable to make that leap of faith she wonders if the dead body must be through a self-sacrifice, or if a priest’s body is truly exempt from the ritual.

The author steeped the well-paced story in intrigue and uncertainty to create a compelling read.