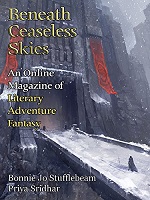 “The Orangery” by Bonnie Jo Stufflebeam

The 214th issue of Beneath Ceaseless Skies has two original short stories.

“The Orangery” by Bonnie Jo Stufflebeam

The story begins with the guardian of the Orangery speaking of the first time in her twenty years on the job that someone had broken in. Her job is to guard and care for the trees which we come to learn are what those despairing of life turn into as an escape. The majority of them seem to be women.

Of course, since these are what those who couldn’t bear life turn into, none have a pleasing story and anyone seeking them can’t have one either. The prose reminds me of poetry in many ways. That’s not necessarily a good thing, as a quarter of the way in I still had no idea what the story was about. I think many readers, myself included, might have moved on. However, the story picks up steam as it moves ahead. The ending is expository and satisfying.

Rani is a young Indian girl living in the mid-point of the British Raj era (1850-1890). As the oldest child she is called upon to earn money for the family. Since boys make more than girls she becomes “Ram” and goes to work in the fields with the other boys. Meanwhile, her sisters and brother go to school. At night she reads their homework and discovers that she’s quite adept in it. Seeking to earn more money she learns enough to apply for a better job.

The job she gets is at the Nawab Retreat where wealthy English come to hunt for big game. The difference is that this big game are mythical beasts. The story is well told and brings one right into it. Ram/Rani is a delightful character and the ending leaves one asking, in a good way, “what happens next.” When what you’ve written evokes that reaction you’ve done well.