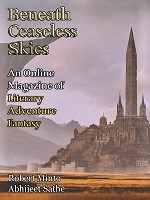 “The Bonfire of the Unknown and the Foreign” by Abhijeet Sathe

At times the most fascinating thing about a story isn’t the words on the page, but what is left unsaid. Speculating is not (or at least shouldn’t be) the job of reviewers, though often enough it does happen. But when a story speaks of love and loss, anger and sorrow, death and healing all in the same breath… it leaves an enduring impression of things unsaid in grief, of emotions too profound to be put into words, and this requires little speculation. It does instead inspire contemplation and empathy. The narrator and his wife Salem are grappling with these primal questions and emotions after the loss of their son. One turns to work, another for solace in religion, neither healing or uniting in the face of shared suffering. While not contemporary, the setting isn’t particularly specific, nor is the era. The narrator is a laborer working over a kiln out in the countryside, and while it could easily be Earth or some alternate version of it, the location is never specified. Not much stands out in these regards, except the existence of avian-like creatures called Angels, and a hint of the otherworldly. Whatever other message or angle the author may have had in mind, the core here is the progressing stages of grief, the healing that happens when shared suffering unites rather than divides, and healing begins.

“The Bonfire of the Unknown and the Foreign” by Abhijeet Sathe

I am often fascinated to the point of distraction with the religions and mythologies of various cultures as far back as I can remember. The author weaves a rich but relatable and enduring fabric from the simple material of forbidden love and loss, and wraps it tightly in the threads of myth. The myths in this case are those of an older era of India. Chandra is a young girl, returning from a trip through the jungle to bring back a cure for her beloved, Vijaya. Though posing as a boy, her journey is fraught with peril, whether from the dangers of the jungle itself, or discovery by the rowdy men with whom she travels. When creatures she believes to be demons kill her male companions, and then spare her in what she knows to be her final moments, many of her beliefs about her own life fall away and she is confronted with tragedy. Her love is dead, for daring to reach above his casteless existence and be with her… he is unknown and foreign, and she the daughter of a well-respected merchant. The plot is not new here, and there are many familiar elements. But it is presented in an intriguing manner and perspective, and the themes within seem especially relevant in the wake of recent world events.