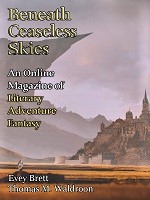 “What the Wind Saw” by Evey Brett

“A Theatre” by Thomas M. Waldroon

“What the Wind Saw” by Evey Brett

Amnesia is a terrifying thing if you really think about it, or have experienced it. The constant, nagging sensation that everyone around you knows something that you once knew, but cannot call to mind. The suspicion that the truth is being kept from you. Even just the frustration of a thought ever just out of reach, teasing you but never granting resolution. How much worse when that amnesia is caused by an injury, and you know not if it truly were an accident? Prince Lysanios suffers as such, in the ancient Thracian city of Abdera, and can barely muster his own identity, much less what went so wrong. As he unravels the threads of his past he finds all his worst fears realized. Gods and men carouse, betrayal abounds, and fratricide waits in the wings while the wind sees everything. This is Greece, after all. The writing here isn’t bad, and I’m always a fan of what amounts to the point where myth and historical settings meet, but there’s nothing original here either. What merit is to be found resides in the descriptiveness and attention to the characters themselves.

“A Theatre” by Thomas M. Waldroon

Despite all efforts, and all good intent, sometimes you just miss. I have no doubt in my mind, from the writing and from the commentary on the author’s blog, of the care that went into crafting it, and that alone deserves respect. With that respect in mind, this loosely-historical fiction feels like a bad trip or fever dream, overdose strength. What starts as two covert agents during the American Revolutionary War investigating counterfeit money quickly devolves into a constantly escalating and devolving spiral of bizarre, disjointed journeys towards Pittsburgh after everything goes wrong. Initially the plot was easy enough to follow, but it lost all cohesion and quickly became difficult to discern plot from hallucination. I couldn’t help but wonder, both during and after reading the story, if this is how going mad feels, madness made manifest in literary form. If such was the goal of the author, then this can only be described as a success. Not being gripped by madness myself, or perhaps just not quite mad enough, I can only say that I respect the obvious care the author put into crafting the story, and love the inspiration he described on his blog. But for me, the story is a swing and a miss.