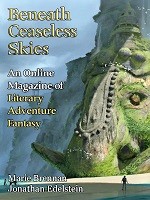 “The City of Kindness” by Jonathan Edelstein

The 329th issue of Beneath Ceaseless Skies has two tales, one of which was a novelette. The authors set both stories during historically tricky times.

Joan is the granddaughter of a hero in this short fantasy set in 17th century England. Her grandfather helped conceal Prince Charles in an oak tree following his failed attempt to restore the monarchy after his father was beheaded.

But history isn’t so simple, and a spirit now lives in the tree; Joan is here to meet that spirit. The girl expects to see nothing, but what she does see at midnight enlightens her in ways her parents never imagined.

The story’s prose was well structured, but the plot lacked depth and seemed to be committed to revealing one modern-day truth about monarchies.

“The City of Kindness” by Jonathan Edelstein

In this fantasy novelette, a friend recruits Isaac the Blind to solve the mysterious kidnapping of an aristocratic son. Set in the late 12th century in the city now called Toulouse, a teenage student disappears. That he is related to Eleanor of Aquitaine makes the political implications perilous to all who live in the city.

Isaac the Blind has magical sight to help in the search. And he quickly discovers layers of involvement that could spell further persecution of the Jews if he cannot resolve this riddle. But the kidnappers have their own magical abilities and quickly thwart Isaac’s best efforts. Can he find a more oblique way to solve the mystery?

Edelstein followed the chequered history of this time when the Crusades dominated western politics. The plot was both interesting and well-paced.