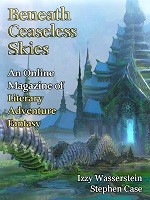 “Dead at the Feet of a God” by Izzy Wasserstein

The 325th issue of Beneath Ceaseless Skies has two captivating short stories.

“Dead at the Feet of a God” by Izzy Wasserstein

She can foretell the future in this short fantasy, set in the city where the Iron God has destroyed the old religion. But her accurate predictions can’t stop her clients who still sacrifice themselves by attacking the cruel new God.

Nor do her prognostications stop her lover, Kiira, from seeking revenge against the Iron God. Now she rolls her bones to make her own forecast. The bones tell her she has no chance. Will she ignore them too?

Though a frequently explored subject, the story’s well-crafted and character-centric plot pulls the reader in, holding them until the end.

When the scribe loses an arm, his young brother must take his place in this short SF story. Writing on the sky as it passes up from the eastern horizon is challenging. The sky’s parchment moves quickly, still the young boy sees words already written from below.

He and his brother begin to wonder about this foreign writing. They write words to praise God; these foreign words do the opposite. Do other people live beneath them?

This story had an original and interesting concept, but the prose was a little too slow to be thoroughly engaging.