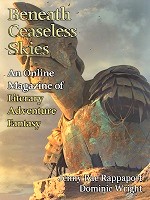 “Girls with Needles and Frost” by Jenny Rae Rappaport

“Degeneration” by Dominic Wright (Not reviewed, no speculative element)

The 315th issue of Beneath Ceaseless Skies has two novelettes, though one didn’t receive a review as it wasn’t speculative fiction.

“Girls with Needles and Frost” by Jenny Rae Rappaport

In Rappaport’s fantasy novelette, Roza takes over the rebellion when the occupiers arrest her mentor for high treason. Roza’s country has a legend about a dragon that came to rescue them three times in the distant past. Her job is to organize the people to signal for the dragon’s fourth coming.

Romantic involvement with one of the enemy soldiers only complicates her efforts, leaving her feeling overwhelmed by it all. Still, she organizes the seamstresses to create the purple stars for summoning the dragon during the winter. And if the dragon does come, the legends say it will demand a heavy price for its support.

This novelette had an interesting multi-layered plot with a comfortable and engaging style. It was a pleasurable read.