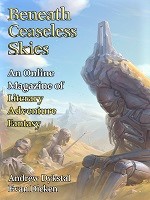 “Fire and Falling” by Andrew Dykstal

“The Transubstantiation” by Evan Dicken

Personal beliefs—they can be freeing or limiting. This 310th issue of Beneath Ceaseless Skies brings to the table two fantastic tales that deal with exactly this. Here, you’ll discover characters that come face to face with this particular aspect of their respective paradigms, and who must choose to either embrace change or remain willing prisoners to the whim of others.

“Fire and Falling” by Andrew Dykstal

An agent of the powerful Lady of Situations, the Duchess Madeleine Lewis, Mir has been sent out as a courier to deliver ciphered pads to the Lady’s embassy in Lycen. As she boards an airship in the town of Flourish, it becomes obvious she’s being followed by a tall woman wearing a jeweled silver dogwood blossom pin on her collar. With no other name to call this stranger, Mir mentally dubs her Dogwood. Aboard and waiting for the ship to leave port, several agents employed by rival lords and ladies make themselves known, each one interested in the parcels Mir carries hidden beneath her clothes. Thinking that the only way out is to kill everyone on board, she stashes a lightning attractor aboard the ship and slips back on to the sky dock. Moments later, the ship lifts into the air, and Mir watches as it drifts further and further away. Then, the lightning attractor does its job, and the vessel explodes. She counts only twelve parachutes floating to the ground, meaning the remaining sixty-six people aboard didn’t make it out alive. Suddenly feeling ill over the first murder she’s ever committed, she turns and vomits off the side of the dock, before finding herself face to face with Dogwood. Caught with no other choice than to discover what Dogwood might want with her lady’s messages, Mir joins her for dinner. Little does she know, however, that this meeting will change the course of her life forever.

Dykstal’s story is very entertaining and imaginative. It has a very enjoyable swashbuckling steampunk feel to it that is just a lot of fun. The explanation of how airships were living beings, where they came from, and how they bonded with their captains was fascinating, not to mention that the politics, characters, and world that the author has created all make for one engrossing read.

“The Transubstantiation” by Evan Dicken

A former actor, Deff had been recruited years ago to play a new role in a different sort of production. He hunts heroes for a living. In the beginning, it was because those heroes had eventually turned from doing good and became tyrants. Nowadays, it’s to keep any new hero from doing the same, no matter how much good they are currently doing. Of course, it doesn’t hurt that the flesh and blood of a hero have all sorts of miraculous properties, which always brought in some much-needed coin. Upon returning to the city of Heko with their newest prize already cut up and ready to sell on the illegal hero trade, Deff and his colleagues get wind that the target of one of their failed hunts, the Weeper, has returned. Considering all the damage that the hero once caused, they have no choice but to go after her and finish the job they started all those years ago.

After reading Dicken’s story, I spent a lot of time trying to figure out just what the author was trying to say—far more time than I probably should have done. For those who don’t know (I had to look it up myself), the title, taken on its own, refers to the Catholic belief that the Eucharist items (wine and wafers) are transformed into the blood and flesh of Christ despite retaining their mundane physical appearances. This is reflected in the story through the blood and flesh of the heroes, which cure all sorts of ailments, the possession and distribution of which is carefully controlled by the Synod. In fact, hunting heroes appears to be forbidden by anyone not a member of the Synod, like the Censors. The Synod and its Censors are obvious references to the church and seem to represent the pitfalls of zealotry and organized religion in a sort of “we’ve left behind the yoke of false idols/gods but replaced it with different idols and a new lying, greedy, power-mad cult” kind of way. In the end, it’s a good story and, while I may disagree with what appears to be its negative sentiment towards paganism and the old ways, I enjoyed it. It’s definitely a story worth spending time with.