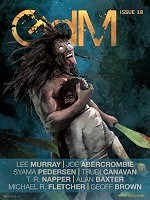 “Eye of the Beholder” by Trudi Canavan

The nineteenth issue of Grimdark would have come in April but the editor was busy getting married. Now that it’s arrived in July, it brings us a half-dozen non-fiction pieces and five stories, two of which are original. The first has a nice set-up but needs an ending with greater intensity and the second, while intense enough, needs a better set-up for it.

“Eye of the Beholder” by Trudi Canavan

A woman with magical powers has violated the norms of her society and been punished by having to rebuild her means of living. She’s done this by taking up the job of miniature portraiture which is ordinarily not very magical and is appropriate for women’s work. However, when a married couple who helped her out in her time of need has marital problems, she finds herself in the middle, trying to repay the favor. Things only get worse though, and when the woman is asked by the wife to provide a means to spy on the husband, which would entail having the woman twist her portrait art in an illegal and darkly magical way, matters come to a head.

This is told via the woman’s monologue and sets up an intriguing situation which seems loaded with potential power but some of it is more effective from a “pro-life” point of view and the whole thing concludes relatively weakly: it does push the protagonist to a brink, reaches a climax, and results in changed circumstances but doesn’t quite explode the way it seems it ought to.

A man is one of many who has emigrated to New Zealand to prospect for a resinous gum but the unkind cops and the system in general is stacked against him. The misery of starvation and hopelessness is depicted. In desperation, despite a warning from a fellow prospector that the local gods will punish him, the man cuts one of the living trees which produces the resin to make it produce for him rather than attempting another fruitless quest for some already hidden in the muck. Then he’s punished.

There seem to be some racial and anti-colonial motifs to this but, regardless, the story fails on the main point of making the desperate protagonist mostly sympathetic but treating him like a villain, complete with over-the-top sadistic details, while the cops and the system never suffer at all. It may be true-to-life, but it’s a very emotionally unsatisfying piece.