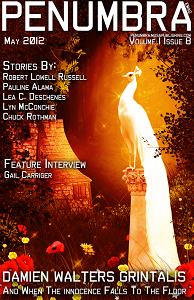 “Concerning the Awkward Affair of the Cape and the Nightgown” by Pauline Alama
“The Princess’s Kiss” by Chuck Rothman
“The Red Shoes” by Lea C. Duschenes
“Path of Stones” by Robert Lowell Russell
“When Innocence Falls to the Floor” by Damien Walters Grintalis
“The Domen” by Lyn McConchie

This issue is dedicated to the retelling of famous fairytales.

In Pauline Alama’s recreation of “Little Red Riding Hood” the story is told from the wolf’s point-of-view. It’s titled “Concerning the Awkward Affair of the Cape and the Nightgown” and it’s not as simple as one might think to create a new story from an old one. The wolf does a decent job of explaining how things really happened and what he was thinking when he met the sexy girl in the red cape. The events unfold in the same order, so it’s impossible to surprise the reader since we anticipate the details. However, the ending took a major detour. It wasn’t a total surprise, however, considering the suggestive build-up. Amusing.

“The Princess’s Kiss” by Chuck Rothman

Known as Fritz the Stupid, our protagonist was left behind to care for the castle and the comatose Princess, called Lady Orpha instead of Sleeping Beauty. Fritz’s days are filled by dusting, tending the garden and caring for the chickens. He is content because the old days are gone, as are all the people, especially the other boys. The boys bullied him and tormented him, so he doesn’t miss them. He is attracted to the sleeping Princess and imagines himself in love with her.

When the Prince arrives Fritz leads him on a wild goose chase tour of the castle, delaying the inevitable. Finally, Fritz claims, “She is dead. She wasted away to nothing.” He does not want to lose the Princess to this handsome intruder. But the Prince draws his sword and threatens him, so Fritz takes him to the Princess.

This is where the story takes a 180º turn from the original tale. The Princess’s kiss is the issue. The writing was clear and the ending was clever. I enjoyed it.

Poetry, for which I claim no expertise.  Intriguing imagery and dark emotion. Nice. If it was meant to represent a specific fairytale, apologies, I didn’t recognize it.

This retelling of “Hansel and Gretel” was obscure and somewhat tricky to recognize. It was like several old fairytales combined, but the style was artistic, imaginative and intriguing. It maintained a successful dark tone throughout and the near-ending was especially morbid right up until the final lines. I enjoyed the suspense.

“And When Innocence Falls to the Floor” by Damien Walters Grintalis

Former foster child, Amelie suffers regular nightmares and bouts of depression. She returns to the house where she lived before her parents were killed. Amelie remembers nothing of her parents nor her life before the age of ten. The house is in ruin, damp and decayed but it recorded Amelie’s history, and out of pity the house releases her childhood to her in a rush of memories. The memories are as horrendous as her nightmares.

A foster mother told her once, “Maybe it’s better that way. You should look forward, not live in the past.”

Amelie confronts the horror and finds peace. Remembering doesn’t make her happy, but the knowledge allows healing. She leaves the crumbling house and gets on with her life.

Brutal images and a believable character. I enjoyed this. Well done.

“The Domen” by Lyn McConchie

The Domen are alien invaders. They seek a new world inhabited by creatures on which they can feast. Their ship lands on earth, hidden from view in a deep crevasse and their youngest member, a mere cub, is sent out as scout. Terrified, he hides beneath a rose bush and is discovered by local resident, Miss Karen, a retiree with very bad eyesight. She hears him whimpering and mistakes him for an abandoned kitten. She takes him in, feeds him, pets him and names him Valentine. He thrives.

Five years pass before Valentine returns to his family. He leads them out, demanding they not devour the humans. He is bigger and stronger than any member of his pack, and they obey him.

The Domen are rehabilitated by love into peaceful creatures, no longer a danger to anyone. This, I assume is a statement against violence and war. (Can’t we all just get along?) While entertaining, the ending felt rushed and unrealistic.